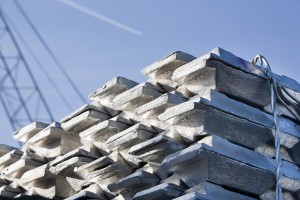 Aluminum ingots have higher demand. At least for now.

Aluminum prices have been on the ascent since late January, with the the latest three-month data on the London Metal Exchange showing the metal at its highest point since October. But will it last?

Through late 2015, aluminum prices suffered from overcapacity, Chinese overproduction, the devaluation of the yuan and stagnant domestic demand. That story changed in 2016 and prices have rebounded due in part to declines in production and future investments.

“The premium for LME cash aluminum over the benchmark three-month contract jumped to $18 a metric ton this week, the strongest since April 2015, indicating tight near-term supply,” wrote our own Stuart Burns, referencing a recent Reuters report.

Alexander Gorodezky, an analyst for Economic Calendar, wrote: “In the last year, Chinese aluminum exports increased over 10% relative to 2014, but exports started to decline again with the start of the New Year. In the month of January, Chinese exports declined almost 12% to 380,000 mt compared with the same month of last year.”

Gorodezky added that Russia, the U.S. and other global producers are reducing their aluminum production due to low prices.

Where Does Aluminum Go From Here?

Burns stated that the aluminum price strength we’re currently seing is a short-term move and MetalMiner remains bearish on the basis of underlying fundamentals. You should expect higher prices in the short term, but for the medium term expect prices to soften.

You can find a more in-depth aluminum price forecast and outlook in our brand new Monthly Metal Buying Outlook report. Check it out to receive short- and long-term buying strategies with specific price thresholds.

PREVIOUS POST:
Vale and Rio’s Iron Ore Joint Ventures Attractive to China
NEXT POST:
Credit Suisse Warns Another Recession Could Lead to a Breakup of the Euro