The seven biggest publicly traded energy companies replaced just 75% of the oil and gas they produced last year. Typically, they run at a reserve replacement ratio of greater than 100%. 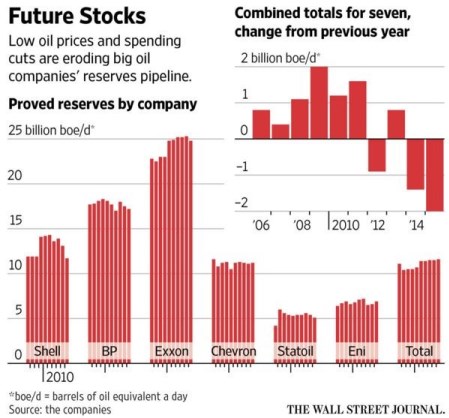 Last year was the first time in over two decades that Exxon didn’t fully replace its production with new reserves, having a reserve replacement ratio of 67%. Royal Dutch Shell was even worse, failing to replace any of the oil it pumped last year; its reserves actually shrank by 20%.

Only Chevron, Eni and Total were able to maintain their reserve replacement ratio above 10%, while BP replaced 61% and Statoil replaced 55%.

PREVIOUS POST:
Chinese Mutual Funds Want to Bet on Local Metals, Other Commodities
NEXT POST:
Will Copper and Oil Lead a Commodities ‘Rush for the Exits?’