According to Reuters, China has accounted for most of the demand growth since the commodities super cycle started in 2002, while over the same period consumption in the other parts of the world has stagnated or fallen as economic growth slowed. So, after a solid run this year for the copper price, the London Metal Exchange has risen from a six-and-a-half year low of $4,318 a ton in January to between $4,500 and $5,000 now. It should come as no surprise that warning bells are being rung in the face of weakening Chinese demand.

Imports Down… Supply Up?

China’s copper imports were down an annual 14.3% in July at 360,000 metric tons, Reuters reports, as the stimulus measures announced last year and early this year begin to lose their earlier impact. Much of the demand strength, such as it is, is currently attributed to speculative activity rather than real market demand. Shanghai stocks are rising suggesting metal being imported isn’t being consumed.

Unlike steel, copper demand is not as heavily tied to the housing market in China. Demand comes from a variety of sectors, most of which benefited earlier this year from a surge of investment but which are now weakening as that stimulus wanes. Investment in the state grid and power industry accounts for about one-third of China’s copper demand, according to Reuters but demand is already said to be slowing, as is that in property and construction, which account for a smaller 20% of copper consumption.

CRU is quoted as saying “In the consumer sectors, demand from the auto sector is steady. Exports helped demand for air conditioners, but domestic sales were sluggish and that isn’t going to change much in the second half.”

Not surprisingly, many are seeing falling prices in the second half, Goldman Sachs forecasts copper prices at $4,200 in six months and $4,000 in 12 months as a wall of supply — forecast by the bank to hit 4.2% growth this year — hits a stagnant demand market. Predictions of supply and demand balance vary considerably underlying the level of uncertainty but HSBC is predicting surplus as this graph from its recent Quarterly Metals & Mining Report shows. 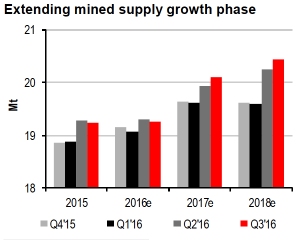 This prediction is made with a 5% disruption allowance built in, but according to Bloomberg 2016 has been the year for which mine supply has been the least disrupted since 2004. Contributing to the surplus supply position, this has impacted prices and Bloomberg says after a rise of 3% this year prices have already fallen back 1.9% this month, maybe forewarning of more to come.