Home | Ferrous Metals | Is The Gap Between US and International Steel Prices Narrowing?
Market Analysis

Is The Gap Between US and International Steel Prices Narrowing?

Domestic steel flat product prices fell in August. It was about time after U.S. steel prices had risen for six consecutive months.

Steel prices not only rose domestically, but also internationally. However, the price increase was much more significant in the U.S. Hot-rolled coil prices in China rose by 40% from January to May, while domestic HRC prices rose by 70% during the same period, creating an unprecedented price arbitrage between U.S. and international prices. This price gap even widened further in June as China’s prices fell while U.S. prices held near their highs.

By the end of the first half, domestic HRC prices had risen by 70% while prices in China were up just by 30%. The main driver of this price gap was trade cases, which made U.S. steel imports plunge this year, inflating prices domestically. However, is this unprecedented price arbitrage here to stay, or will prices revert to their mean?

We would bet on the later. The arbitrage remains strong enough to justify shipping to the U.S. and enough holes exist in the anti-dumping duties to allow material to reach U.S. shores.

Indeed, the arbitrage between U.S. and international prices might be already narrowing. While U.S. prices fell in August, Chinese prices rose. 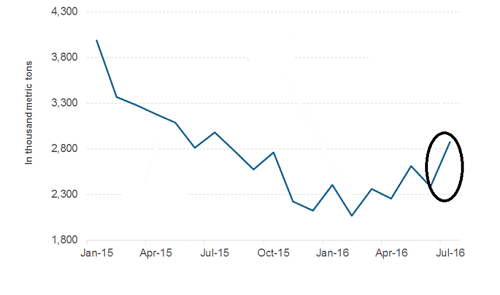 Since early this year, U.S. steel imports have fallen sharply each month. However, the rate of decline last month was the lowest since April 2015. July steel imports rose 12% from June’s figures, reaching a 1-year high.

Eventually, U.S. prices should follow international steel prices and move up or down depending on how much capacity China actually cuts and whether the country provides more stimulus or not.

PREVIOUS POST:
Mexico Locks in Oil Price for 2017 at $42 Per Barrel
NEXT POST:
CRC-HRC Spread at Record Levels: Will it Revert to its Mean?