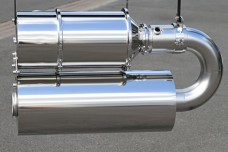 But the miner, Anglo American Platinum, has an investment division that makes hard-nosed commercial investments that hold out not the dim and distant prospect of eventual impact but the imminent probability of strongly positive environmental benefits. The firm is helped by its positioning as a major miner of platinum group metals (PGMs) and the pivotal role those metals play in catalyst technologies.

Burning flare gas produces carbon dioxide (CO2), nitrogen oxides (NOx), carbon black, and other pollutants such as methane, which, according the Environmental Protection Agency, as a greenhouse gas is 25 times more potent than CO2. The World Bank estimates that, globally, approximately 140 billion cubic meters (5 trillion cubic feet) of natural gas is flared annually, resulting in the emission of more than 300 million tons of CO2. Eliminating these emissions would be the equivalent to removing more than 77 million cars from the road or the combined total car fleets of Germany and the U.K., according to the firm’s statement.

Anglo American has been actively investing growth capital in companies that can demonstrate the commercial viability of their products or technologies since 2013. Anglo American Platinum’s Platinum Group Metals Investment Program holds investments in Hydrogenious Technologies and United Hydrogen Group, and has just added another, Greyrock Energy — whose catalyst-based system converts liquids and gasses such as flare gas, natural gas, bio-gas and similar feedstocks into clean liquid transportation fuels with hydrogen as a by-product.

The hydrogen production is seen as supporting Anglo’s efforts to help develop fuel cell technologies and fuel cell feedstock supply. For Anglo, this is seen as a solid investment in a growing technology but environmentalists extol the fuel cells’ ability to produce electrical power and produce nothing worse than clean water.

In a recent press release Anglo announced its investment in Greyrock while strongly promoting the potential environmental benefits of both the process itself and the growth of technologies that lower costs would support but, make no mistake, Anglo is making these PGM technology investments with the intention of buying into a rapidly expanding industry from which it will augment its mining revenues in the future.