At the presidential debate Monday night, Democratic Presidential Nominee Hillary Clinton, when asked how she would create jobs by moderator Lester Holt, said, “Here’s what we can do. We can deploy a half a billion more solar panels. We can have enough clean energy to power every home. We can build a new modern electric grid. That’s a lot of jobs; that’s a lot of new economic activity.”

It has often been said that the truth is the first casualty in the world of politics and the democratic party’s long-term commitment to battling the very real scourge of climate change is more dogma than policy these days wherein its adherents are committed to stopping what President Obama called “the rise of the oceans,” no matter what the cost and no matter how effective the tools it currently has really are — in this specific case, solar silicon photovoltaic panels. That’s just how so many business ventures lose sight of the bottom line and fail.

Solar Ahead of Wind?

It was actually rare to hear Clinton specify solar as a technology to “create jobs” as the usual dogma is to tout “wind and solar” with little specifics about how either of these generation technologies — which don’t require raw materials to be dug out of the ground as with the fossil fuels that currently provide most of the country’s electricity. That would mean a lot of former miners and drillers either selling or installing the estimable sum of half a billion solar panels and, once that install base is set, where do those “new jobs” go from there? 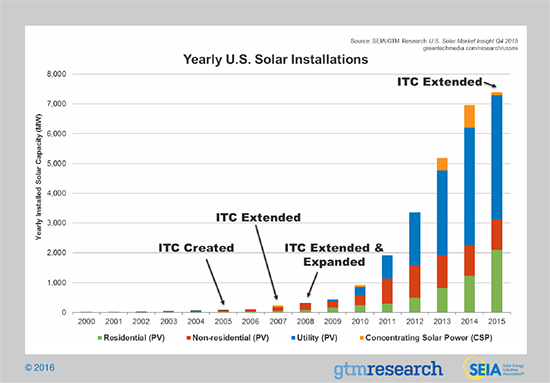 The growth in solar, in the last two decades, has been heavily dependent on the solar investment tax credit. Source: GTM Research.

If Clinton is really talking about jobs in production of crystalline silicon photovoltaic panels, she may be surprised to learn that the production end of solar has been a mature industry for decades now. There’s already a booming industry with plenty of skilled workers producing panels quickly and efficiently.

According to GTM Research, nearly 209,000 Americans already work in solar today — more than double the number in 2010 — at more than 8,000 companies in every U.S. state. By 2020, that number is expected to double to more than 420,000 workers, but that’s a total of 211,000 jobs by the end of a potential first Clinton administration. That’s not that much job growth, all things considered. Modern factories are already able to churn out large volumes of panels quickly and efficiently.

As for how that will “create jobs” in a macro sense? In Bureau of Labor Statistics terms, 211,000 jobs is a good month, NOT a good four years and certainly not the panacea that the roughly 400,000 workers in oil, gas and coal in swing states such as Ohio, Kentucky and Pennsylvania are banking on to insure the future of their families. This is not a lofty policy goal to people trying to put food on the table. 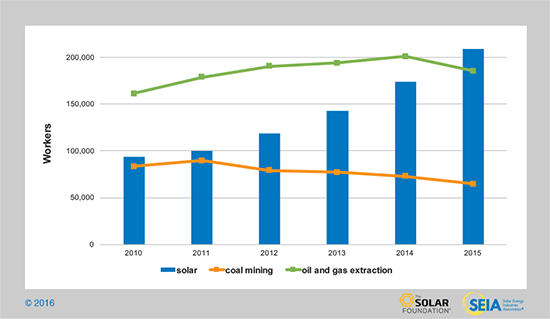 Solar jobs will increase by 2020, but the increased will be in the hundreds of thousands and not hundreds of millions. Source: GTM Research.

Let’s say that Mrs. Clinton is hoping that installation of the panels creates significantly more jobs. Like construction, these jobs would be dependent on the install base and individual desire by home and business owners to install them. This means more government spending to incentivize installation. So far, that has not resulted in the required numbers. Prices for silicon in our Renewables MMI have not significantly moved due to costly government subsidies.

On top of low demand, there is also the fact that there are plenty of installers out there today and independent installers are actually fighting for market share with companies such as SolarWorld that want to control both production and installation. The installation market could shrink due to consolidation.

Solar panel power output drops between 10-25% of installed capacity on cloudy days. That means a backup from, you guessed it, natural gas or coal is required today to provide power when the sun doesn’t shine. If Clinton was to install 500 million panels today, they would all require natural gas or coal-fired plants to back them up

My colleague, Stuart Burns, recently wrote about the billions being spent on research into how to store solar energy and that is a burgeoning sector, but there won’t be a lot of jobs coming from such research. It’s likely to be more like a few hundred materials scientists and research engineers working hard in university and government-funded laboratory settings. Again, not the place to go looking for work if you’re one of those swing-state voters displaced by Mrs. Clinton putting a lot of coal companies out of business. Most of the people displaced in coal country did not go to Harvard or MIT.

There is a very good reason for voters to be skeptical of Mrs. Clinton’s solar promises. They have not delivered in the past and even the most generous technology advancement and adoption models aren’t anywhere near what she is promising. The democratic party might want to reconsider its policy position placing solar, and until recently wind, ahead of bridge technologies such as nuclear and natural gas as a backup, because such reliance on solar — with today’s technology — is simply not a reality based position.

PREVIOUS POST:
Reshoring Initiative Has a Roadmap for American Manufacturing
NEXT POST:
What Is a 332 Investigation? Aluminum Execs to Pitch ITC