Home | Commodities | Section 332 and The Week In Overproduction of Oil, Aluminum and Steel
Commentary

Section 332 and The Week In Overproduction of Oil, Aluminum and Steel

Welcome back to the MetalMiner week-in-review. This week, the aluminum world got together in Washington to discuss the threat of overcapacity and the particular problem of Chinese overproduction.

The U.S. International Trade Commission is involved now. Read our investigation of Chinese overproduction and how it affects aluminum companies around the world while the ITC deliberates. 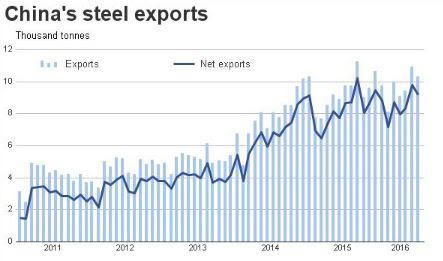 Speaking of overproduction, the Organization of Petroleum Exporting Countries has finally agreed to its first production cuts since 2008.

Earlier in the week it looked like yet another false alarm, but production leader Saudi Arabia has the highest budget deficit among the world’s 20 biggest economies, may delay its first international bond issue and now faces fresh legal uncertainty after the U.S. Congress voted Wednesday to allow Americans to sue the country for its involvement in 9/11. Looks like the pressure finally caught up to the Saudis.

Speaking of overproduction, China’s Baoshan Iron & Steel (commonly known as Baosteel) and underperforming Wuhan Iron & Steel Co. were forced into an arranged marriage by Beijing this week. Now, Baosteel will try to absorb WISO’s losses on its balance sheet as the central government tries to consolidate its massive steel sector and keep as many jobs as possible while overseeing the slowest cuts to overproduction in the history of time.

Meanwhile, the investment appeal of precious metals was waning early this week as a strong dollar kept formerly high-flying gold and silver down. Even industrial/precious metals palladium and platinum were losing ground. Now? The Dow Jones Industrial Average dropped nearly 200 points yesterday and precious metals could be back in fashion soon.

To Tax or Not to Tax?

Back here in the U.S., no post got more comments this week than my semi-rant against the idea of a value-added tax for U.S.-based companies. The Reshoring Initiative is a big supporter of the idea of a VAT, provided corporate taxes are lowered to make the tax burden relatively neutral. We here at MetalMiner wonder how such a tax would even be collected with many duties and taxes already going unenforced today.

In the presidential race, renewables have long been a the one-size-fits-all energy solution for the democratic party and that was on full display in the first debate on Monday.

Should We Overproduce Solar Panels?

Democratic nominee Hillary Clinton touted “half a billion more solar panels” as the way to create jobs in the debate. Demand for solar panels in the U.S., though, is relatively stagnant and companies are already consolidating installation jobs. Under such a plan, U.S. solar panel manufacturers would have the potential to become our own little Wuhan Iron & Steels.

Without a major advance in storage technology mass solar would still need a backup for when the sun doesn’t shine, probably from fossil fuel natural gas. We e-mailed Hillary our explanation, but we heard it got deleted.

We’re hoping for more about metals overcapacity in the next debate.