The shipping industry would argue that it moves more cargo with a lower carbon footprint per ton than any of the alternatives.

Airlines, by comparison, move a fraction of the cargo (even including passengers) and yet emit comparable global CO2 emissions. Yet, while automakers and car buyers have been forced to accept the costs and burdens of substantial legislation, the manufacturing (particularly in Europe) has had to pay ever higher power costs to subsidize national reductions in greenhouse gas emissions from their power industries and heavy industry has been regulated on emissions of just about everything, the shipping industry has gotten off relatively scot-free.

Frugal as the shipping industry is in terms of CO2 emissions per mile/ton, it is still a major polluter as anyone who has witnessed a ferry boat or ocean liner firing up its boilers will testify. Not only does the industry account for some 3% of greenhouse gas emissions on current trends, it is forecast to rise to 5% by 2050, when all other targets are set to halve from 1990 levels. 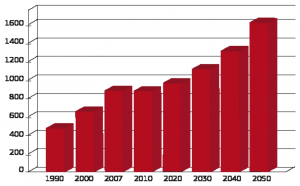 The problem is compounded by the fact that a ship’s bunker fuel is probably the most hazardous and polluting of fuels burned for any major industrial application anywhere, with higher levels of sulfur and other health damaging constituents.

The industry’s argument that it is achieving better efficiencies and lower emissions per ton in recent years is countered by environmental groups who say the near 30% improvement is almost solely because of the slow steaming regime introduced after the last financial crisis to save costs.

If demand picks up and vessels return to their designed speed this “improvement” will be lost. What is needed, they say, is a tougher regime than the airline industry has adopted this month in Montreal where airlines and their national bodies came together to agree to a new deal.

Airlines will be expected to offset their emissions growth after 2020 by buying “offset credits” in line with their carbon footprint. As we covered in a recent article on the topic, the carbon costs are expected to incentivize the industry to develop lower-carbon fuels and technologies, while the money raised by the credits will fund environmental initiatives to help to tackle climate change.

To what extent this last part comes to pass remains to be seen, as the temptation to dip into the proceeds for other needs will be immense. The cost is forecast to grow to as high as $23.9 billion by 2035, or 1.8% of the airlines’ revenue.

No such agreement exists for the shipping industry and some would say it’s just as well with major carriers like Hanjin going into bankruptcy and others struggling to survive but that won’t stop legislators taking heart from what was achieved with the aviation industry and attempting the same kind of scheme with shipping. Environmental considerations are not a cost shipping companies have had to account for to any significant degree in the past (beyond ballast tank flushing and tanker spillages) but it will become a major cost in the next decade as legislators put the industry in their sights.

PREVIOUS POST:
Week-in-Review: Is the Federal Reserve Finally Ready to Get Hawkish?
NEXT POST:
Copper Price Forecast, October 2016: Downward Pressure on the Horizon?