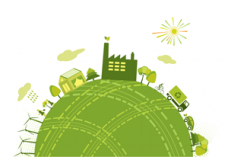 China would probably argue that it gets bad press when it comes to environmental issues.

Not surprisingly. China is said to be the world’s largest emitter of greenhouse gases, having overtaken the U.S. in 2007, and was responsible for 27% of global emissions in 2014. It’s right that it gets a lot of attention.

Largely due to the consumption of about half the world’s coal, China is the world’s largest source of carbon emissions, and the air quality of many of its major cities fails miserably to meet international health standards. Life expectancy north of the Huai River is said by the Council on Foreign Relations (CFR) to be 5.5 years lower than in the south due to air pollution, while water and soil pollution are equally severe.

Yet for all that, or maybe because of it, China is taking considerable strides to address its problems. A recent article in the South China Morning Post reports on the tough stance environmental protection bodies in China are taking with large industrial groups.

Last year, China Hongqiao became the world’s largest producer of primary aluminum but that hasn’t stopped the environmental protection watchdog of Zhouping county in Binzhou city, where its facilities are located, ordering the company to cease production at lines with a combined annual capacity of 3.61 million metric tons.

Between May 27 and September 23 EPA watchdogs issued 11 penalty announcements against the firm, including orders to stop construction of a 1.32 million mt a year smelting plant and the construction of a 4,800-megawatt power plant. In addition, they’ve been order to shut down a 1,320-mw power and heat co-generation plant and another Alumina refinery due, the article says, to a failure to obtain environmental approvals. China Hongqiao expanded its aluminum capacity by nearly 30% to 5.89 mmt in the 12 months to June 30 and announced in August that it plans to expand  to 6.5 mmt by the end of the year. That target now looks in doubt.

China Hongqiao may be the largest aluminum firm caught in the EPA’s action, but it’s far from the only one. Shandong province provincial government said that over 7,000 projects have been built without proper environmental approvals as of February 2015. The article said some 1,312 projects are to be phased out by the end of this year.

Since then, pollution problems are too severe to be cured. Another 3,665 projects are considered rectifiable since they are in line with government industry policies, but currently fall short on environmental requirements.

Some 2,042 others are in the “to be improved” category, which means while they fulfill both industry policy and current environment requirements, they need to reduce their emission levels further to meet future potential standards tightening. They must obtain approvals on remedial work done, most of Hongqiao’s issues fall in this last category, and, for now, the firm says all plants continue to operate normally in spite of the shutdown orders.

If history is anything to go by, it would appear as if Chinese corporations, hell-bent on expansion, build the plant, start production and then ask for forgiveness and make remedial changes if the authorities object on the grounds of pollution or permissions, rather than ensure they have all environmental compliance issues both current and projected covered in advance.

In 2014, China Hongqiao was ordered by the Binzhou municipal government to rectify excessive emission problems in 14 of its power generating units and cited for failure to obtain environmental assessment impact approvals at 10 of its smelting facilities. It has since rectified the problems and will do the same with these new orders. While it raises questions about Chinese corporations attitudes to environmental protection it does, encouragingly, suggest that the authorities have the will and the teeth to do something about it.