India is becoming a growing powerhouse in the base metals industry and — although producers seem more intent in expanding outside the country, witness Aditya Birla’s smart acquisition of Novelis — the country has the two significant advantages that encourage an expectation of rapid domestic growth. These are low current per capita consumption and the world’s fifth-largest domestic reserves of bauxite.

Obstacles to India and Base Metals

Assured rapid domestic growth is not a slam dunk, though. Power costs in India are high and competing demands for power in a country with a severe shortage of generating capacity mean refiners have to build their own captive power stations to ensure continuity and price competitiveness.

Both mining and plant construction then run into problems of land ownership and poor supporting infrastructure. Both issues that could be addressed if there was the political will and, as such, can be said to be self-inflicted. That’s cold comfort to producers struggling to get projects approved and developed on budget. So, maybe, it comes as no surprise that producers have been lobbying hard for protection against imports. 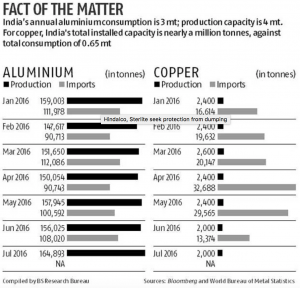 According to industry sources quoted by the Economic Times of India, imports of aluminum have increased by 159% in 2015 compared to 2011 levels. Possibly more worrying for the industry is that the country is importing more than 50% of aluminum consumed. While India has annual aluminum consumption of 3 million metric tons, half of that is supplied by imports. India’s production capacity is 4 mmt.

So, when India’s state-run engineering consulting firm Metallurgical & Engineering Consultants (India) Limited (MECOM), was commissioned by the Aluminum Association of India to study solutions for protecting the domestic aluminum industry, it returned a recommendation recently that the government impose a Minimum Import Price (MIP) on aluminum entering India. It should come as little surprise that the government gave it serious consideration, but what does come as a surprise is that they voted against it.

Why No Aluminum Minimum Import Price?

India is no exception to the strength of lobbying groups. They exert a lot of influence everywhere, after all, but traditionally there deals have been made in back room meetings often to the detriment of consumers. That’s not so today.

Modern India is becoming a bastion of honest open business under Prime Minister Narendra Modi. if his administration achieves nothing else, it should be applauded for the change in business and government culture. Consumers number in the hundreds of millions, whereas producers can be counted on one hand.

If it was deemed that producers faced unfair competition, World Trade Organization rules allow redress but interestingly, so far, producers have not pursued that avenue at all. Maybe government would be better advised finding some other way to support its producers such as effective land reform, help with lower power costs and/or investment in efficient infrastructure.

Lower domestic prices, whether due to imports or more efficient or competitive domestic production, will drive greater aluminum consumption and expand the market. In the long run that will be to domestic producers’ benefit, as well as that of hundreds of millions of consumers.

PREVIOUS POST:
Best of 2016: Steel-Insight’s H2 2016 and 2017 Steel Market Price Outlook
NEXT POST:
Mystery Aluminum Stockpile May Be an Attempt to Get Wealth Out of China