What will 2017 bring for the steel industry?

At the beginning of the year, it’s always fun to look forward and pick out some of the themes for the year. 2016 was certainly volatile as hot-rolled coil pricing went from $360 a ton to $600/ton, then back to the low $400s/ton before recovering to $600/ton. Phew!

One big difference in 2017 is that we think there will be a strong upturn in finished flat steel output after production fell in 2016.

In addition to the new capacity at Big River Steel (1.4m tons per year of HRC), which we expect to be operating at 70% capacity utilization by the second half, ArcelorMittal is ramping up its Calvert operation fed by higher output at Indiana Harbor after it restarted its blast furnace there in December and U.S. Steel is restarting its 3.6 million tons per year HRC line at Granite City fed by slab from other locations and may start up at least one of the blast furnaces in half two (not yet confirmed by the company).

Additional HRC from Acero Junction (if it goes ahead with the restart of 1.4m tons per year of capacity) is another possibility. Strong profitability in steel (due to high prices and relatively input prices) should encourage existing mills to maximize output.

The market can absorb higher output despite lackluster demand primarily due to low inventories. In terms of that demand:

Yet we expect output to be significantly higher. This will not impact prices through the first half of the year as inventories are low.

Overall flat-rolled inventory (at least the visible stuff) therefore fell in 2016 by around 1.3 million tons or around 2% of the total market. This meant that apparent consumption in 2016 was essentially flat and this was the second successive year of destocking. 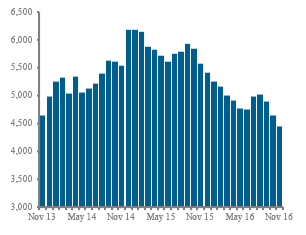 So how about prices?

With scrap likely to move higher in the near term thanks to tight inventories and a positive outlook for steel production as well as potential disruptions to deliveries, we believe that steel mills will look for a further hike as early as early-mid January, although it could be a more conservative $20-30/ton.

Amid low inventories and little import arbitrage in HRC, we expect them to be successful and there could be further price gains out in Q1 and into Q2 with HRC reaching as high as $700/ton. By Q2 however, we expect global raw material prices to be lower as will steel prices and this will allow the return of higher import volumes. In addition, we would expect higher output to begin to have an effect on the market at that point. As a result, we expect prices to come down again and may move back to or even below $500/ton by the end of the year.