The demise of the primary aluminum smelting industry in the western world has been like a long, slow train crash. As this graph from CRU shows, the decline has been relentless, and although many reasons are cited for the closures of U.S. and European smelters, power costs and the resulting cost of production are a primary cause. 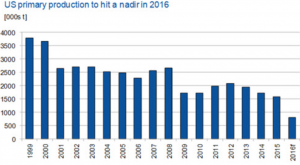 According to North American trade group the Aluminum Association, since 2015 seven U.S.-based aluminum smelters — more than 60% of U.S. primary aluminium smelting capacity — have been curtailed or closed. Over a similar time frame as the graph shows, Chinese aluminum production has grown from 11% of global primary aluminum in the year 2000 to nearly 55% today.

The West has been surprisingly philosophical about the loss of smelting capacity, appearing to take the view that aluminum is such an energy-intensive product that the movement of smelters to low-power cost locations has a logical inevitability about it.

Where is Aluminum Production Going?

That argument holds true for the growth in the Middle East. Production in and around the cradle of civilization has jumped from 0.9 million metric tons in 1999 to an expected 5.7 mmt this year. But it hasn’t until recently had much logic for high-power cost locations like China. Even Beijing would appear to agree that power production and prices are sufficiently precious and high-cost that exporting primary aluminum is not a logical business model even for an export-orientated economy like China’s.

As a result, export taxes of some 15% have been in place for years to dissuade smelters from looking to export metal even if, by some quirk of global pricing, it was profitable for them to do so. New privately owned smelters in China’s Northwest regions utilize the latest technology and, with captive power plants based on a very low cost coal, do arguably have some of the lowest production costs in the world.

But a significant number of China’s more established aluminum producers have been loss-making or only marginally profitable for years, yet still the country exports substantial volumes of downstream value-added rolled and extruded products. Exports that have contributed to a significant surplus of semi-finished product availability, displacing established suppliers and depressing prices.

What a WTO Case Can Do

So ex-president Obama’s parting shot to the World Trade Organization (WTO) is probably long overdue. The administration launched a new case at the WTO last week that is nominally targeted at the Chinese aluminum industry accusing China of flooding world markets with under-priced aluminum, steel and other products in recent years.

The case is aimed squarely at challenging how Beijing’s financial sector subsidizes China’s industry via artificially cheap financing and subsidies, according to the Financial Times. The stated aim is not just to pressure China to end of subsidies for primary aluminum production, but also to achieve greater transparency and adherence to commitments on environmental policies such as greenhouse gas reduction to achieve a level playing field for more highly regulated western smelters. Besides low-cost loans, China also is also accused of providing low-priced coal, electricity, and alumina to its producers, resulting in a massive surge in investment at the expense of U.S. smelters and to the detriment of global prices.

Whether the action will lead to higher import tariffs, or anti-dumping action remains to be seen and in large part may depend on how China responds to the WTO process. They have not been very successful in the 16 previous cases bought to the WTO by the Obama administration and are likely to find an even more intransigent position adopted by the new administration of Donald Trump. For consumers of aluminum semi-finished products, this will be a case to watch, whether as a consumer you import product or buy domestically makes no difference, if the case is effective and results in tariff increases or anti-dumping legislation, prices will rise.