Trump Administration Lines Up Berlin in its Trade Deal Crosshairs

However much we may focus on supply and demand fundamentals, metal prices and economic stability will be influenced more in 2017 by trade policy than just about any other issue.

The new Trump Administration in Washington has already shaken up the status quo for NAFTA with threats to renegotiate the terms of that 20-year-old agreement in a manner that would have been inconceivable just six months ago.

Now, Peter Navarro, who heads the new National Trade Council, described the euro this week as an “implicit Deutsche Mark” that gives Germany a competitive advantage over its trade partners and accused Germany’s structural imbalance in trade with the rest of the E.U. and the U.S.A. as the result of a deliberately engineered-to-be-undervalued currency. Navarro accused Germany of engineering a grossly undervalued euro to exploit the terms of trade with its principal trading partners and called it illegal.

Professor Navarro is a contentious figure with strong views on trade policy but, on this issue, many would agree that since the start of the single currency Germany has pushed through policies in labor law and tax bills that amounted to an internal devaluation. According to a series of articles in the Telegraph newspaper these policies cut unit labor costs in manufacturing by 4.4% in just one year, 2005, and since then the country has continued to benefit from a weak currency running large current account surpluses with its neighbors and the rest of the world.

Is Germany Really a Currency Manipulator?

Large current account surpluses are, invariably, the result of tax policies, regulations, hidden barriers, and an overall governing structure that punishes consumption and fosters exports, the Telegraph says. They are not the result of good engineering or clever product marketing, as Germany would have us believe.

E.U. law rules that persistent surpluses above 6% of GDP for more than three years in a row are illegal, yet Germany has consistently run huge surpluses without Brussels taking any action. Germany is currently running a current account surplus of 8.8% of GDP aided and abetted by an undervalued euro. Analysis by the Organization for Economic Cooperation and Development (OECD) agrees the euro is trading below its fair value, saying the euro is the most undervalued currency among the U.S. dollar’s major peers. 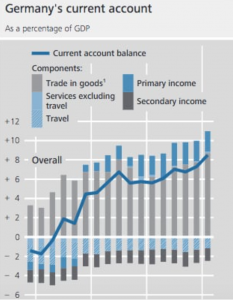 Simon Tilford from the Centre for European Reform is quoted as saying “What winds everybody up is that Germany keeps pretending that these surpluses are pre-ordained. But they are the result of incentives, and governments can change incentives. German policy is set in the perceived interest of exporters at the cost of everybody else,” he said.

A Shot Across the Bow?

Ironically, while Navarro and others have long-accused China of running unfair and unreasonable trade surpluses, Beijing is at least trying to tackle surpluses by boosting domestic consumption and reducing the economy’s reliance on export-led growth. China’s trade surplus has dropped from 10% to 2.5% of GDP leaving Germany as the standout pariah of what we’ll call “international beggar-thy-neighbor trade practices.”

Whether Navarro and the new Trump Administration intend to take on Germany’s trade surplus or just to complain about it remains to be seen, but based on recent experience headlong confrontation is a more likely tactic than whining from the sidelines.

This week’s comments have already caused volatility on foreign exchange markets with relative dollar strength and weakness impacting metal prices, but we haven’t seen anything yet compared to what could happen if Washington decides that Berlin is not responding to its concerns.