Platinum’s Fortunes Not as Negative as Markets Suggest

Reports of platinum’s demise have been much exaggerated — or so this month’s report from the World Platinum Investment Council (WPIC) would argue.

Sales of diesel vehicles in some parts of Europe have taken a beating in recent months over concerns that authorities will raise costs or otherwise make living with diesel engines a less attractive proposition for owners, due to negative sentiment post-Dieselgate. Total car sales have dropped in some European markets, including the U.K.. However, where sales have held up there’s been a definite swing to gasoline vehicles rather than diesel.

The markets have read this trend as meaning platinum demand will fall — but maybe not surprisingly, the WPIC is taking a more optimistic view.

Regardless of buyers’ short-term preferences, the WPIC says the auto industry has an overarching challenge in the years ahead that will support platinum demand. Automakers will face fines if they do not meet new EU CO2 targets by 2020, but the report lists the industry’s rather limited options.

First, the industry could boost sales of battery electric vehicles (BEV). However, with a consensus expectation of BEVs taking no more than 5% of the market by 2025 due to lack of charging infrastructure, it seems unlikely BEVs are the short-term solution. 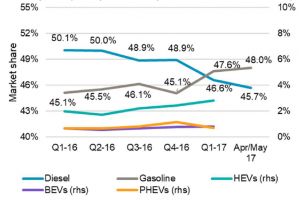 Second, the industry could sell a higher percentage of hybrids. Recent trends, however, suggest demand for hybrids, despite Volkswagen’s Dieselgate, is still growing too slowly. Demand is certainly not growing fast enough to reach those emissions targets, which are just 2 ½ years away.

So, the third option — and to be fair to the WPIC, probably the most likely option — is for automakers to clean up diesel. The technology already exists to meet the most stringent nitrogen oxide (NOx) targets set for 2022, but the industry needs to do more than it has done in the past to prove to the buying public the performance figures they publish can be achieved in the real world.

The WPIC points to French automaker PSA, which has undertaken to publish independently certified, real-world CO2 test results for its vehicles. PSA also recently announced it will do the same for NOx results.

It is only by automakers voluntarily — or maybe by legislation — being forced to accept third-party verification of their emission figures that they will be able to rebuild consumer trust and deflect harsher government legislation on diesel engines in the future.

Not surprisingly, the attraction of the WPIC is significantly cleaner diesel engines will require increased platinum-group metal (PGM) loadings, even as the industry shifts from the current lean NOFX trap (LNT) system to the more effective selective catalytic reduction (SCR) technology. According to ExtremeTech, when announcing Ford’s switch to SCR, it reported that SCR is more costly, but it’s also generally considered more effective than LNT.

Of course, the platinum price has more drivers than just the demand for the catalysts in the automotive market. Investor demand in the form of ETFs, physical demands in the form of jewelry, and chemical and catalyst demand from the chemicals industry are all significant drivers on the demand side.

But much of recent negative sentiment toward platinum has been due to controversy over the diesel engine’s ability to meet emission targets.

And in that sense, platinum’s fortunes will in part ride on the coattails of the auto industry’s ability to re-establish the diesel engine as an environmentally acceptable propulsion unit.