OPEC Being Beaten by Both the Tortoise and the Hare

It is no surprise that oil prices continue to fall when you look at the rising tide of oil production around the world. 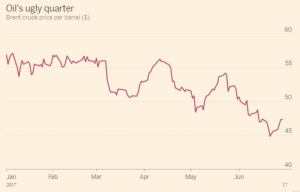 The U.S. shale industry is frequently accused of being the main culprit, but tight oil is far from alone.

A recent FT article explores how investments that were started five or six years ago, when the oil price was $100 a barrel, are now coming on stream with a vengeance.

The FT quotes a forecast released by the Canadian Association of Petroleum Producers, which sees the country’s output increasing by 270,000 barrels a day this year and a further 320,000 barrels a day in 2018. The article notes that the combined two-year Canadian increase will be equal to almost a third of OPEC’s production cuts planned for this year.

Canada is home to the world’s third-largest reserves of oil and is the largest external supplier to the U.S. market, shipping in as much as the rest of the world put together. These new projects may not be making money at today’s prices, but they are making a contribution to the massive investments already incurred.

The FT quotes the Alberta Energy Regulator saying the minimum per-barrel oil price for a mining project to recover capital expenditures, operating costs, royalties, and taxes in 2016 ranged between $65-$80 a barrel. Meanwhile, the price for “in situ” plants using steam was $30-$50 per barrel. Today’s cost for oil shipped to the Cushing hub is at no more than $44 per barrel.

Costs for operational plants are lower, with estimates quoted by the FT is $22 per barrel for mining projects and as low as $11 a barrel for in situ plants. In addition, it could be that many of these new investments have hedged their forward sales at higher prices. 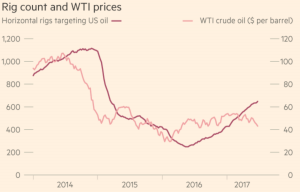 That is certainly the case with the U.S. shale frackers.

A separate FT article estimates that some 40% of the industry was hedged at about $50 dollars a barrel, with some resource areas — like the Permian Basin of Texas and New Mexico — having hedging rates as high as 70-90%.

Unlike tar sands, tight oil can be turned on and off with considerable flexibility, like the hare to the oil sands’ tortoise.

Rig counts have been rising for 23 consecutive weeks, the FT notes, and with a growing stock of  drilled-but-uncompleted (DUC) wells rising by 22% to over 5,000 between December and May, there is considerable potential for output to be increased further.

As if rising production from Canadian tar sands and U.S. tight oil was not enough, OPEC is also seeing its own cartel members increase output by 336,000 barrels a day in May from April, led by big rises from Libya and Nigeria, according to FT.

Saudi Arabia may well be ruing the day it opened the taps in order to drive down the oil in the hope of killing off “high cost” U.S. shale oil. The prospects of getting an oil price back above $100 must now look like a distant dream.