Hedge Funds Take Bullish Bet on Copper, But Will it Last?

On Monday, our Irene Martinez Canorea wrote about copper prices, which have been on a bullish run. Today, Stuart Burns writes about investors’ copper positions.

Investors jumped into copper after the official Chinese PMI rose for an 11th consecutive month, to 51.7 in June. Hedge funds and other investors increased long positions by 9,531 contracts to 58,816. Reuters reported that net long copper positions are now nearly double the 29,787 contracts reported back at the beginning of May and a dramatic reversal from the net short position of 47,109 contracts just a year ago.

The jump in the LME price was short-lived, dropping back as the dollar strengthened and LME data showed copper stocks gaining, but the Reuters report went on to question whether the current bullish run for copper is likely part of a longer-term recovery or a short-term case of overexuberance. 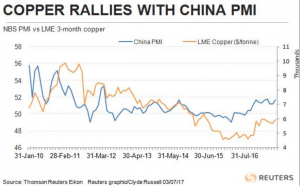 Although Chinese PMI numbers are not an exact measure of copper demand, they have been a good indicator over time. But after nearly 12 months of positive PMI numbers, many analysts are said to be expecting weaker readings in the second half of the year.

Chinese stimulus measures have boosted growth for longer than most had expected, but cracks are beginning to show in the housing market and Beijing’s tightening of credit is impacting small- to medium-size enterprises. The performance of those enterprises are not reflected in the official PMI figures, which are focused more on the large corporate sector.

Smaller businesses are measured by the Caixin PMI, which fell to its lowest level this year in June and is now hovering around the break-even point between contraction and expansion.

With the impact of stimulus measures beginning to decline and global stocks of copper remaining plentiful, it’s hard to see a case for copper’s continued strength in the second half of the year, despite the bullish bets indicated by the increasing long positions.

If Reuters’ analysis is correct, we can probably expect an easing of copper prices, if not during the summer then into the fall.