Despite U.S. oil stocks falling 7.6 million barrels, the biggest drop since September, a recent Financial Times article reports, quoting U.S. Energy Information Administration data, that the oil price is struggling to get back to $48 per barrel, let alone the heady heights above $50 it achieved in May.

U.S. refineries are running flat out to meet summer demand, drawing down on U.S. stocks — but still, the price is not responding.

Meanwhile U.S. exports are booming. Rather than being constrained by OPEC cuts, global production is rising. Ironically, even Saudi Arabia is pumping above its target, reporting to the cartel that last month it raised output to 10.7 millions barrels per day, a 190,000 b/d increase on the previous month and 12,000 b/d above its own target.

The Kingdom claims it needed to increase output to meet peak electricity-generating demand experienced during the summer months, but the Saudi increase contributed to total OPEC overproduction of 393,500 b/d from last month, according to the Financial Times. 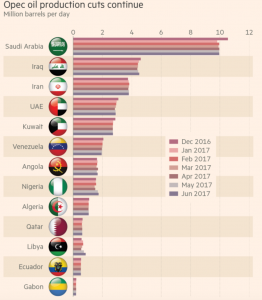 Iraq, Nigeria and Libya are all pumping more oil than at any time this year and Iran is close to its own year’s highest output, too.

In addition, Canadian oil sands production is rising, Production is predicted to be higher still next year as new projects come on-stream (despite the low prices), making many projects marginal or even loss-making, debts must be repaid and oil sands producers are hanging in there hoping for firmer prices.

News south of the border is not encouraging, though. U.S. tight or shale oil production has continued to rise this year, although at a more gradual rate than seen over the last 12 months. Nevertheless, shale oil producers have become adept at squeezing profits out of production, even at sub-$50 per barrel prices, and show no signs of backing off at current levels.

Long-position holders are hoping OPEC may take further action to curb supplies, but members are sticking to their mantra that they expect stocks to decrease and, therefore, prices to rise, as the current restrictions bite.

But as the Financial Times notes, OPEC’s own monthly report indicates the group still faces an uphill struggle to balance output under the terms of its supply deal, what with cheating and non-OPEC production.

A balanced oil market seems a distant dream for producers.