The Winds of Global Capital Are Blowing in New Directions

An interesting article in the Financial Times explores the decline of global capital flows since the financial crisis and how the nature of capital flows has changed markedly since 2007.

The article draws on research by the McKinsey Global Institute looking at how bank lending, particularly European cross-border bank lending, has shriveled up and been partially replaced by company fixed-asset investment. That, we would normally say, is a good thing. Foreign Direct Investment (FDI) is usually a more productive commitment by companies in factories and other facilities.

But the concern is the main factor behind the expansion in FDI has been the flow of investment booked in “financial centers” — the polite phrase for low-tax countries such as Ireland, the Financial Times says.

A lot of this money represents tax-motivated profit shifting that simply shows up on balance of payments as FDI flows.

Cross-border capital flows are down significantly from where they were when the global financial crisis began, the Financial Times reports. The $4.3 trillion that flowed around the world last year was only a third of the peak of $12.4 trillion in 2007. While no one is suggesting a return to those levels would be a good idea – much of that liquidity resulting from savings in China and other emerging market economies and the wealth of oil exporters found its home in U.S. property, helping build a bubble that led to the financial crisis — but nor is it healthy that firms are squirreling away billions off-shore to avoid tax at home. Think Apple’s massive off-shore war chest, as an example.

Another major change that the world is only just catching up to is the shift in capital account balances.

At the time of the financial crisis, China had the world’s biggest surplus while the U.S. had the largest surplus on its current account – mainly trade. Now, it is China and Japan, as the graph below shows, and politicians in the U.S. are only just catching up to the idea that Germany is the mercantilist of the second half of this decade, not China. It should be said, however, that all imbalances have declined relative to GDP. 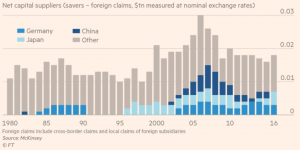 Finally — and this will not come as any surprise — the role of mature economies is waning compared to emerging markets.

Developed economies are sending significantly less money overseas in the form of FDI than they did before the crisis. Their share of global FDI has also been falling as China’s role has grown. This is already causing a reaction in the U.S. and Europe to Chinese firms buying up famous and occasionally strategic firms and assets, and may yet lead to legal barriers being raised to prevent further encroachment.