Zhongwang Marches on With Global Ambitions

China Zhongwang is a company that is used to controversy.

Then again, you don’t get to be the world’s second-largest aluminium extruder in the space of a few years without ruffling a few feathers.

Zhongwang’s attempts to muscle in on the global stage by buying Aleris Corp immediately ran into opposition from U.S. senators. Just this week, Zhongwang USA, an investment firm backed by Zhongwang Group’s chairman and Aleris Corp, announced its intention to extend the deadline for a decision by two weeks to end September, Reuters reported.

Zhongwang USA is not part of Hong Kong-listed China Zhongwang Holdings Ltd, but Liu Zhongtian heads up both companies — a fact that has clouded multiple investigations against one entity or another in recent years.

Zhongwang USA made its move on Aleris in April 2016 and the fact that we do not have a satisfactory conclusion is partly due to previous allegations that a Zhongwang affiliate, Perfectus Aluminum Inc, was involved in attempts to illegally import aluminum.

According to those allegations, Perfectus did so by wrongly categorizing it for customs purposes and partly because of widespread opposition to the notion that a major U.S. aluminium producer should be owned by a Chinese entity. A whiff of xenophobia hangs in the air over that one, Aleris, while a valuable and highly reputable U.S. aluminium flat product maker is hardly strategic in the defense industry sense.

Nevertheless, Zhongwang appears still set on its global ambitions and has simultaneously swooped in on another target in Europe. By taking a near total (99.72%) stake in the German firm Aluminiumwerk Unna AG via its wholly owned German subsidiary, Zhongwang Aluminium Deutschland GmbH, Reuters reports, it has bought itself a highly respected asset.

Unlike Aleris, which is a multi location general rolling group producing a range of high quality rolled products for automotive and general engineering applications, Unna is very much a niche extrusion mill. The firm, based near Dortmund, is a single site integrated operation from melt shop to extruded and drawn seamless tubes and special profiles of exceptionally high quality. The firm supplies oil and gas, defense and aerospace markets, as well as small production run specialty markets. The firm only has seven extrusions presses and as the graph below illustrates, growth has been challenging in recent years. 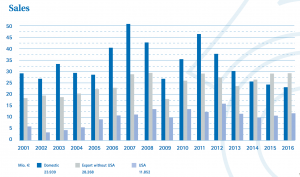 Zhongwang’s purchase price has not been revealed, but their Euros will be buying them considerable expertise and experience. The firm states its intent is to access the aerospace market.

Several Chinese producers have approvals for aerospace certification and a few are already supplying Airbus and Boeing (or at least their supply chain), but Unna is firmly embedded in the aviation sector. It will be interesting to see if Zhongwang leaves them to continue operation as a standalone investment, or if they will seek integration and some economies or knowledge transfer.

PREVIOUS POST:
Tin Trades Sideways, Other Base Metals Pull Back in Early September
NEXT POST:
This Morning in Metals: AEC Applauds DOJ Probe of Zhongwang, Affiliate