Steel Price Outlook Rosy on the Back of Global Recovery, China Cuts

It would be an exaggeration to say steel producers have never had it so good, but on the whole, conditions have been supportive of the sector this year — both globally and in top producer China.

Beijing’s supply side reforms, cutting out older, less efficient steel plants largely on environmental grounds has directly supported the larger state steel sector. Much of the “illegal” and less well-regulated (therefore more polluting) producers are concentrated in the smaller end of the private sector. These have been the first to suffer enforced closure as Beijing pushes through its aim of closing some 50 million tons of capacity this year.

A widespread clampdown on the scrap-based EAF producers (virtually all of whom are in the private sector, and deemed illegal because they often do not have licenses and more polluting because they are based on scrap)  has constrained supply and given rebar prices a drug-induced high.

The move underpins Beijing’s rationale to achieve as many wins as possible, reduce capacity to avoid anti-dumping moves by trading partners, improve environmental conditions (specifically particulate emissions, which cause smog), and consolidate a highly fragmented domestic steel industry all while simultaneously minimizing job losses and supporting the state sector at the expense of the private sector.

Bingo — they have it all!

Tale of the Tape

So far, you should say, Beijing is doing very well. Capacity has closed, particularly older and therefore likely less efficient capacity; steel production is actually up 4% year-on-year, and prices have risen robustly.

The state sector is doing very well, enjoying high prices, strong demand with the removal of their smaller competitors and, following an 18% fall in iron ore prices over the last month, look set to make even better profits in the last quarter. Iron ore import volumes have also fallen of late, as the graph below from the FT shows, but that may partly be due to large inventories that had built up as the price rose. 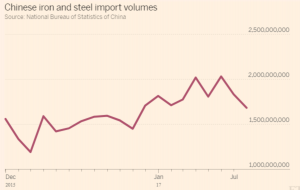 Steel prices in China as tracked by MetalMiner’s IndX have weakened this month, but with the fall in raw material costs Chinese producers’ margins have held up well.

In the rest of the world, China’s reduced exports, down 26% year-to-date due to anti-dumping barriers and improved domestic demand, have created some respite for foreign steel mills, particularly Russian, Turkish, Ukrainian and Canadian suppliers that have stepped in to take China’s place as low-cost supplier to the U.S. and European markets.

Producers in Europe are still complaining bitterly about competition, but as with the U.S., realistically it is less about China and more about low-price suppliers in Russia, Ukraine and elsewhere.

On the back of rising global steel demand and soft input costs, steel producers’ margins should be supported even in Western markets and prices remain firm next year — even if China’s demand grows only slowly.