The Iron Ore Price Has A Lot Of Explaining To Do

Steel prices in China have been rising, but iron ore prices have been falling — what’s going on there?

China is shutting domestic iron ore mines at an accelerating rate, forcing steel companies to import iron ore from overseas, which would normally be supportive for the iron ore price.

The answer it would seem, as is so often the case, has more to do with speculators’ view of future fundamentals than actual current fundamentals.

Steel prices in China are strong because steel demand remains robust, despite exports being crimped by protectionist measures in North America, Europe, India and elsewhere. Domestic demand is holding up well.

Meanwhile, supply-side action by Beijing is cutting swathes of steelmaking capacity. Initially, much of the cuts came to “illegal” production, such as EDF scrap based long products mills — which has happened largely under the radar — but also older, less efficient and more polluting steel plants. All of this follows Beijing’s pledge to cut 50 million tons this year as part of an environmental drive to reduce air pollution by November (the start of the winter heating season). 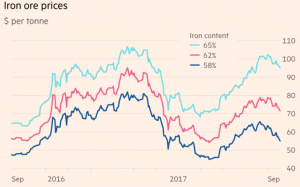 After strong price rises this year, investors have done well and are now taking their profits ahead of a perceived fall in demand, as steel curtailments really begin to bite later in the year. It would be a brave speculator who bet against the wave of negative sentiment toward the iron ore price, including even the Australian government, which has been warning of price falls.

“There is no shortage of both iron ore and steel inventories in China,” said Strickland, quoted by The Sydney Morning Herald.

According to The Sydney Morning Herald, Beijing said it would suspend construction of major public projects during winter to improve the capital’s air quality, despite the impact that could have on steel demand.

So why would Beijing cut domestic iron ore production?

The Environmental Case for High-Grade Ore

Back to the environmental argument, much of China’s 1,900 surviving domestic iron ore mines produce low-grade ore, typically 30% Fe content, but sometimes only 20%. By comparison, Australian and Brazilian ore can be up to 62% Fe content.

First, it requires extensive sintering with coke to improve the iron content prior to use in a blast furnace, which is a polluting and energy-intensive process.

Second, in a steel market of high prices and tight capacity, every ton counts — so steel mills favor higher-purity iron ore that increases blast furnace efficiency. That suits Beijing, as it also reduces pollution per ton of steel produced.

Speculators fear that as steel demand is reduced, iron ore demand will fall in a market where more and more supply is coming on stream, making it a buyers’ market and reducing the ability of the big three to control the price.

The preference for higher-grade iron ore is likely a structural shift in the seaborne market. China is not going to backpedal on its environmental policy and steel mills will need to use the highest purity iron ore to counter rising environmental thresholds for what is permissible.

A continued divergence between the price for 62% Fe content and 52% or lower will continue. That will help the big producers with access to top-grade material. However, the trend in and of itself will not be enough to support a market moving into surplus, both this year and next.