On the heels of an eight-point leap last month, the Construction MMI dropped a point to hit 90 for our October reading. 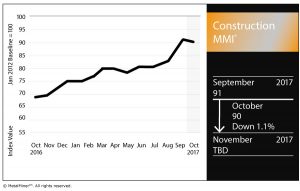 The prices of Chinese rebar and H-beam steel, in addition to U.S. shredded scrap, all fell on the month. European aluminum 1050 sheet also posted a modest drop.

On the positive side of the ledger, Chinese aluminum bars and the trio of U.S. bar fuel surcharges in this sub-index posted price increases.

As we noted last month, the housing market struggled in August, when existing-home sales fell to their lowest levels of the year.

Hurricanes Harvey and Irma, which shook Texas (and southwestern Louisiana) and Florida, in addition to the severe humanitarian toll, also rocked the housing market.

“The South saw a decline in closings last month that was largely attributed to the after-effects from Hurricane Harvey in the Houston area,” according to the National Association of Realtors (NAR). “Home sales likely will be impacted for the rest of the year in Houston and in the most severely affected areas in Florida after Hurricane Irma.”

“Nearly all of the lost activity will likely show up in 2018,” said Lawrence Yun, the NAR’s chief economist.

Even so, home prices are rising fastest in cities prone to experiencing natural disasters, according to the NAR.

“Strong demand for homes in high-risk natural hazard areas has helped to accelerate price appreciation in those areas over the past decade, despite the potential for devastating damage, as evidenced by the recent hurricanes that made landfall in Texas and Florida,” said Daren Blomquist, senior vice president at ATTOM Data Solutions, as quoted by NAR. “That strong demand is driven largely by economic fundamentals—primarily the presence of good-paying jobs, although the natural beauty that often comes hand-in-hand with high natural hazard risk in these areas is also attractive to many home buyers.”

Reuters last month reported on Harvey’s impact on the Houston housing market, namely in the form of a housing shortage and rising prices reminiscent of Hurricane Katrina’s impact on New Orleans.

“The supply of houses and apartments is expected to drop sharply with tens of thousands of homes destroyed and uncertain prospects for future flood insurance costs,” Reuters reported.

According to the most recently available U.S. Census Bureau data for the month of August, construction spending in the U.S. increased 0.5% over the revised July estimate of $1,212.3 billion.

Broken down by sector, private spending was up 0.4% in August from the previous month, at a seasonally adjusted total of $954.8 billion.

According to the Architecture Billings Index (ABI) put out by the American Institute of Architects, billings continued to show growth in August.

Billings across the country increased for the seventh consecutive month, according to the most recent ABI report.