Who would have thought it — a major Japanese corporation caught falsifying inspection and quality data?

Japanese standards have come to be accepted as a byword for quality in the manufacturing industry — but it would seem in a world where even Germany’s premier automotive giants can cheat and deliberately mislead customers, so can the Japanese.

Who can you trust, consumers down the supply chain must be asking, if even Japanese and German manufacturers are prepared to lie and falsify quality assurance data?

The latest scandal to rock Japan’s manufacturing sector is an admission by the country’s third-largest steel producer, Kobe Steel, that for potentially up to 10 years they have been falsifying quality data.

As these goods have gone into aerospace, construction, automotive and transport applications, the only saving grace seems to be that checks so far suggest the material supplied has met the standards expected.

But as the investigation is in its early stages, there is plenty of scope for worse scenarios to unfold.

Some 20,000 tons of metals delivered to about 200 customers are said to have been affected this year, with not just steel but also aluminum and copper goods involved. The Financial Times reported products affected included: 19,300 tons of aluminum plate and extrusions; 2,200 tons of copper strip and pipe; and 19,400 cast and forged aluminum parts for customers such as Boeing, Toyota, Honda, Mazda, Mitsubishi Heavy Industries – maker of regional jets and the H-2A satellite launch vehicles.

Boeing issued a statement saying, “Nothing in our review to date leads us to conclude that this issue presents a safety concern, and we will continue to work diligently with our suppliers to complete our investigation.” That, however, hasn’t saved the share price from taking a pummeling.

Kobe shares are down over 40% this week. The cost of protecting the company’s bonds has quadrupled over the same period. 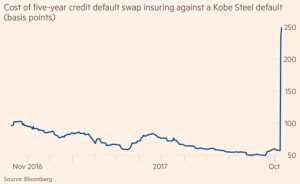 The company is desperately trying to get a handle on how widely and for how long the falsification of paperwork has been going on, and whether it also extends to Kobelco, the group’s maker of construction equipment.

Unfortunately for Japan Inc, Kobe is not alone in its misdemeanors.

Two weeks ago, carmaker Nissan recalled nearly 1.2 milliom vehicles that had been certified by unauthorized technicians. Last year, Mitsubishi Motors admitted to having overstated mileage figures for eight vehicles in its range.

Is it too much to expect major corporations to tell the truth? They certainly trade on their brand image as reliable and high-quality manufacturers.

Such failures make something of a mockery of Western firms’ often disparaging comments about the quality of emerging-market competitors when their own systems and procedures appear little better.

PREVIOUS POST:
This Morning in Metals: Copper Continues Bounceback
NEXT POST:
The October MMI Report: Sub-Indexes Dip Back Down