Breaking Down the Graphite Surcharge Cost for Stainless Steel

The mills cite rising graphite prices as the culprit. MetalMiner analyzed the electric arc furnace (EAF) production process along with graphite prices, and concluded that the surcharge does not appear justified.

MetalMiner reader Franck Fraudeau from Safe Metal provided us with some data, which we have used to conduct additional analysis.

Let’s re-examine the cost to produce one metric ton of graphite electrodes. 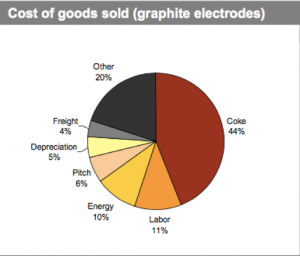 Needle coke, a crude oil derivative, accounts for 40-44% (depending on the year) of the cost to produce one metric ton of electrodes. Graftech, one of the leaders in graphite electrode production, prices graphite electrodes to their customers along two parameters:

Brent crude oil prices have remained below the $90/level since the end of 2014. Therefore, this surcharge has not caused the increase in graphite electrode prices; in fact, the increase comes down to the base price.

Needle coke comes from either petroleum or coal. Needle coke prices increased from $450/ton to $3,200/ton in one year. For graphite electrodes, coal is commonly the raw material.

It is true that coal prices have increased since the beginning of 2016. However, prices were higher at the end of 2016 than they are today.

The Role of Coal

The whole surcharge hinges on an increase in one of two raw materials needed to make needle coke: coal.

As mentioned, the producers of electrodes can use the substitute material, oil, which of course has traded flat. Graphite electrode production is currently controlled by only a few companies, such as SGL Group and Graftech, each with substantial operations in the U.S., and China-based Fangda Carbon.

However, needle coke production is mainly located in China.

Contracts and purchases are based on a bidding process, but generally these three companies supply most of the domestic market. In 2016, SDK tried to buy SGL Group, but the U.S. started a complaint against both groups in September 2017, claiming that it limits market competition. By joining forces, the two firms would account for 56% of the domestic market, resulting in decreased market competition.

It’s possible — and we have not done the research — that the European market relies more on needle coke made from coal and not oil, hence the real rise in prices for electrodes to European companies (including Outokumpu). North American electrode producers may have a competitive advantage by using oil instead of coal.

According to Roskill, “The graphite electrode industry is oligarchical with very few companies having the production technology. Prices are set by the major players including US company, GrafTech International, and Chinese company, Fangda Carbon New Material, which together, account for around 22% of global capacity for graphite electrodes, as well as other major companies in Japan, China, India, Russia and Germany.”

Producers Ought to be Asking…

Even if needle coke prices have increased, margins appear wider than before.

And if we were on the negotiating team for EAF producers, we would put some pressure on the electrode producers to use oil-based derivatives versus coal.

The table below models the COGS of graphite electrodes shown at the beginning of this article. Based on current needle coke prices using 40% as the cost basis, we can see the producers’ cost has increased from $1,240/mt to $8,900/mt. The current sale price indicates the prices for graphite electrodes, as reported by Safe Metal.

Thus the needle coke price increase has a significant impact on the overall margins of the electrode producers.

Although needle coke prices have increased, as shown in the table above, graphite electrodes can be produced using crude oil. In fact, GrafTech’s most recent annual report specifically states that one of its U.S. facilities produces petroleum needle coke.

How Does This Impact Steel Prices?

Since steelmakers deploy two different processes to produce steel (EAF or BOF blast oxygen process), we might expect to hear some noise from the EAF steel producers.

However, we suspect the EAF producers have long-term contracts for electrodes. Steel EAF producers may have locked purchases and contracted supply on a 6-12 month basis, as contracts are settled in the graphite electrode industry.

Some Turkish EAF producers have changed steel production times (for example, at nights, when electricity is cheaper) as they consider this increase an operational cost and and have adjusted steel prices.

Did stainless steel producers buy forward for their electrode requirements? We’d like to think so. Why have some mills, such as Outokumpu, announced the surcharge for Mexico and Canada and not the U.S. market? Was AK Steel caught short by not locking up raw material supply, or does AK want to try and capture additional margin from customers with a surcharge?

Some in the industry have started to question the logic behind the electrode surcharge, stating that the most recent base price increase should cover this increased cost. Why hasn’t it?

Please feel free to share any of your thoughts with us privately at research@metalminer.com or leave a public comment.