The Construction MMI dropped a point for the second consecutive month, falling from 90 for a November reading of 89.

There were not many significant movements in either direction within the basket of metals. Chinese rebar rose in price, while Chinese H-beam steel dropped. U.S. shredded scrap, meanwhile, fell 6.3%. European commercial 1050 sheet aluminum also fell, dropping 1.3%. 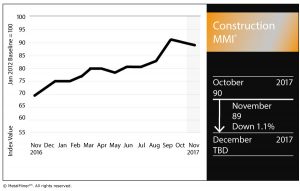 According to U.S. Census Bureau data released Nov. 1, total spending for September amounted to an estimated $1,219.5 billion, up from the revised August total of $1,216 billion.

Public construction, however, was up for the month.

According to the most recent Architecture Billings Index (ABI), put out by The American Institute of Architects, billings slowed down in the month of September.

The ABI posted a 49.1 for the month (a reading of 50 indicates no growth, while anything below 50 indicates a drop in billings). The September figure broke a multimonth streak of billings growth.

However, the ABI report cautions against hasty reactions to the relatively down month.

“Billings have been growing at a strong pace in recent months, so it is too early to determine whether this is a new trend or just a modest course correction,” the report states.

The impact of Hurricanes Irma and Harvey, which rocked Florida and Texas, respectively, also showed in this month’s batch of data.

“The general economy showed more signs of the impact of the hurricanes in September, with nonfarm payroll employment posting its first monthly decline in seven years,” the ABI report states.

Nonetheless, in this month’s ABI survey questions, a majority of construction firms indicated either it was still early to ascertain the scope of any potential impacts to projects as a result of the hurricanes or that they had not seen any impacts to date.

According to the survey results, three-fourths of respondents said they have not seen any hurricane-related impacts on their projects (49%) or that it was too early to tell (26%).

On the other hand, only 5% of firms nationally said they had to cancel or delay projects due to the hurricanes (unsurprisingly, that figure rises to 12% when focusing specifically on firms based in the South region).

As always, the U.S. housing market is something to keep an eye on.

According to Census Bureau data released last month, privately owned housing starts in September dropped 4.7% below the revised August estimate. Single-family housing starts were down 4.6% for September from the previous month.

The next new residential construction report is scheduled to be released Nov. 17.

As for existing-home sales, the National Association of Realtors (NAR) put out a rosy outlook for 2018.