Rare Earths MMI: A Down Month for the Basket of Rare-Earth Metals

The Rare Earths MMI dropped for the second consecutive month, losing a point to hit 21. The November reading of 21 marks the lowest reading since June, when it also hit 21. 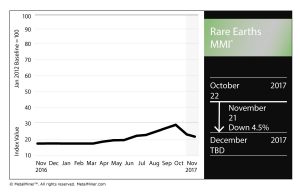 However, europium oxide, terbium oxide and terbium metal all dropped for the month. The biggest drop of the bunch came from neodymium oxide, which fell 14.1%.

Rare-earth metals are used in a number of high-tech capacities: smartphone, laptops and electric vehicle (EV) batteries, among other things.

Cobalt, which is drawing increasing demand in the EVs sector, is one of those metals. As our Stuart Burns reported earlier today, the metal is heating up.

“Plug-in vehicle sales grew 20 times faster than the overall market, justifiably causing concern that cobalt supply could be strained by this one market application,” Burns wrote. “Worryingly for cobalt, the fastest-growing market is also the largest.

“Driven by government subsidies, the Chinese market, at some 351,000 units last year, also grew at 84% over 2015. The switch to EV and PHEV cars is part of Beijing’s drive against pollution, so incentives are not likely to be relaxed anytime soon. Growth of this magnitude dwarfs the 13% and 36% growth rates in Europe and the U.S., respectively.”

Growth of the U.S. Market

While it is indeed true that China overwhelmingly dominates the global rare-earths market, the U.S. is working to increase its presence in the global market vis-a-vis rare earths.

According to a Wards Auto report, research at Purdue University could boost U.S. extraction of rare-earth elements (REEs) while also recycling the U.S.’s 1.5 billion tons of accumulated coal ash.

“REEs have many important applications in things such as permanent magnets in power generation and electric cars, batteries, petroleum refining catalysts, phosphors in color televisions, and many electronics including cellphones,” said Linda Wang, inventor of the technology and Purdue’s Maxine Spencer Nichols Professor of Chemical Engineering, in a Purdue University release. “The demand for REEs is predicted to grow dramatically over the next several decades. REEs used in the U.S. are primarily imported from China, which controls over 90 percent of the supply, with wide implications on the U.S. economy and national security.”

Wang underscored the importance of developing the domestic market as a means of weathering the volatile rare-earths market.

“For example, after China reduced the export quotas in 2010, the costs of rare earth magnets for one wind turbine increased from $80,000 to $500,000,” she added. “After China relaxed the export restrictions 18 months later, the prices returned to lower levels than in 2010. It’s highly desirable to develop the capacity to produce REEs in the U.S. and to become independent of foreign suppliers.”