There is widespread agreement and considerable evidence to suggest the global weather patterns of El Niño and La Niña can have a significant impact on commodity prices.

But impacting average temperatures and rainfall as these weather patterns do, the most significant impact is, not surprisingly, on agricultural commodities in the grain sector.

As Agriweb observes, “Dry weather conditions in the U.S. can threaten the development of corn, soybeans and wheat crops, and dry conditions in Argentina and southern Brazil can impact corn and soybeans.”

El Niño and La Niña broadly act as opposites, reflecting as they do the interaction of large areas of warm water in the Pacific with global weather patterns. We were under the influence of El Niño effects last year, but have recently moved into conditions meeting the La Niña pattern. The La Niña pattern is characterized by a shrinking of a large pool of warm water in the Pacific as a strengthening of westbound trade winds carry warm surface water from the east to west and allow an upwelling of colder waters in eastern regions. The overall temperature of surface water decreases and on the western side of the Pacific the arrival of warmer waters increases rainfall while on the western side cooler temperatures tend to reduce rainfall, resulting in drought conditions. The last La Nina year was 2011-2012 where drought conditions caused a grain prices to surge.

According to the Climate Change Centre, drawing on work by the National Oceanic and Atmospheric Administration (NOAA), NOAA’s National Weather Service, released in a recent report, “El Nino/Southern Oscillation (ENSO) Diagnostic Discussion,” La Niña conditions have a 65-75% chance of prevailing through to the February-April 2018 period.

But what impact can this have on metal markets?

Clearly, mining and metal extraction are less weather-dependent than the growing of crops. However, while a shortage of water for the irrigation of field crops can be dramatic for crop yields, it can also be significant for the generation of hydroelectric power for the mining sector and metal smelting in certain regions of the world. 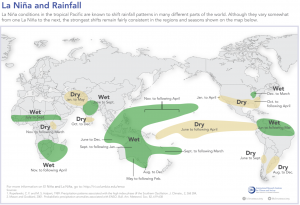 As the above graph from a University of Sydney School of Economics paper last year illustrates, in La Niña years rainfall can be reduced in areas like the eastern Pacific such as Chile and Peru. The reverse can be the case in southeast Asia and Australia, where excessive rainfall has caused flooding and resulted in supply disruption for mining companies in the iron ore, tin and bauxite markets prompting price rises over short timeframes.

The paper suggests 20-30% of metal price variations at the one-to-two year horizon can be attributed to El Niño/La Niña oscillations.

As a more frivolous aside, for anyone yet to book their winter ski vacation in North America this year, the developing La Niña would suggest the current outlook favours above-average temperatures and below-median precipitation across the southern tier of the United States, and below-average temperatures and above-median precipitation across the northern tier of the United States.

So, head to the northern Rockies for the snow and colder temperatures.

PREVIOUS POST:
This Morning in Metals: U.S. Steel Responds to City of Chicago
NEXT POST:
Podcast Ep. 2: WTO Facing One of the Biggest Issues in its History Right Now