Is the Hong Kong Property Market Going to be the First Casualty of Fed Tightening?

We have been far from alone in issuing periodic warnings about the implications of rising interest rates for a global debt market that is out of proportion to levels seen even before the last recession.

Fortunately, one of the first test cases has deep pockets and enough experience to deal with it.

But even so, Hong Kong’s housing market is so overstretched it is at risk of collapse if rates rise too soon or too high. According to The Telegraph, 90% of Hong Kong’s mortgages are linked to three-month Hibor (HK interbank lending rates).

Because of its currency peg to the U.S. dollar, Hong Kong is being forced to intervene to defend the peg and stem capital outflows, as global interbank rates rise and the Fed tightens. According to The Telegraph, the authorities are preparing to sell “exchange fund bills” to drain liquidity, raising fears of a credit squeeze and a property correction that could quickly turn into a collapse. “The Hong Kong dollar is at its weakest level in 33 years. It suggests an imminent risk of capital flight,” Francis Chan, a bank analyst for Bloomberg Intelligence, is quoted as saying. 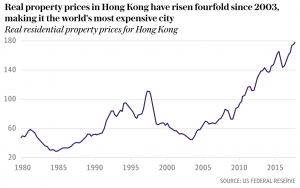 The price-to-earnings ratio of the local property market has reached an all-time record of 19, compared to the previous peak of 14 at the onset of the East Asia crisis in 1998, the article states, noting that episode was followed by a 60% crash in house prices. The article notes the Bank for International Settlements says Hong Kong’s financial system is the most dangerously overstretched in the world. 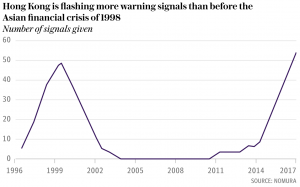 The “credit gap” is 45 percentage points of GDP above its long-term trend, a sign of extreme behavior and the best-known predictor of banking crises. The BIS says that any persistent gap above 10 points is a warning. Currently, Hibor is still around 1%, while three-month U.S. dollar Libor rates have risen to a 10-year high of 2.29% – up 50 basis points since just early February.

Something has to give or the markets will borrow Hibor, invest Libor and massive capital flight will ensue. 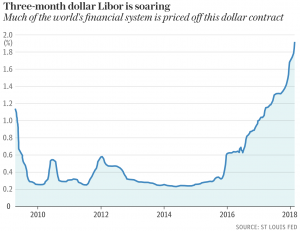 Apparently Hong Kong’s banking system is 8.3 times GDP and the absolute scale is large enough to have global systemic consequences.

Some of the highest exposed are HSBC and Bank of China, who alone have Hong Kong deposits of almost $700 billion between, them the article states. Hong Kong’s banks are considered rock solid, with a liquidity ratio of 146%, the article assures, well able to weather the storm of a property collapse, but maybe not so well prepared are foreign banks and investors lending into the sector.

As the article notes, you cannot control the currency and monetary policy but still have open capital flows. In times of stress, one must give — and in short order, cheap money has to come to an end with a doubling of local borrowing costs an all but certainty over the next 12 months.

What that means for the highly leveraged housing market doesn’t bear thinking about, with roughly 90% of mortgages linked to three-month Hibor.

Capital Economics expects house prices to fall by a third over coming years, noting that the property market “is living on borrowed time.”