Aluminum Tariffs Results Are a Mixed Bag for U.S. So Far

If the aim of President Trump’s 10% import tariff on aluminum was to impact China or to encourage the reshoring of primary aluminum production into the U.S., it has, at least so far, been at best only a partial success.

Just last month, Alcoa announced it will permanently close one of four potlines at the fully curtailed facility in Wenatchee, Washington, preferring to take a $62.4 million payment to the local energy provider Chelan Public Utility District (PUD) on the chin than invest in restarting the facility.

According to Alcoa, the potline planned for closure, Line 3, with a capacity of 38,000 metric tons per year, has not operated since 2001. Three other lines at the Wenatchee site, totaling some 146,000 metric tons per year, have been curtailed since December 2015. Another line at the Wenatchee site was permanently closed in 2004, underlining that not even significantly higher aluminum prices are enough to justify restarting.

Down in southwest Indiana, however, the firm is restarting its Warwick smelter, closed in March 2016 due to low aluminum prices. A local source advised Alcoa would reopen three of five smelter lines and add about 275 jobs at the complex, where its smelter feeds a rolling mill making aluminum for food and beverage packaging.

It would seem the U.S. will never (or not for years) be able to replace the 5 million tons it imports. Rather than generate American jobs, it will simply mean American consumers will have to pay more.

The CME spot contract tracking the U.S. Midwest physical aluminum premium is currently at 21.25 cents per pound ($468 per metric ton), Reuters reports. Now, admittedly there is a Russian premium in that premium, reflecting the sanctions applied to America’s second-largest supplier of primary aluminum, Rusal. But the Russian disruption is also being priced into higher premiums everywhere else and Japanese buyers are only paying a premium of just $160 per ton for the next quarter, the news source reports. 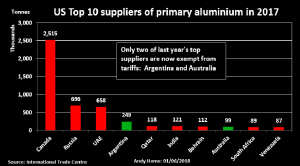 Meanwhile, Australia and Argentina, bizarrely exempt from the tariffs, will no doubt ship all they can up to their quota limits. Last year’s 100,000 tons and 250,000 tons, however, will not make much of a dent on Canada’s 2.5 million tons of metal supplied into the U.S. market.

Back to our opening question — if the intention on the other hand was to impact China, the strategy looks like it will have even less impact.

China exports no primary aluminum to the U.S. and precious little semi-finished metal following previous anti-dumping and tariff actions. Sadly, an opportunity for multilateral action at the G7 summit in Canada was missed, as the summit imploded amid infighting and disagreement.

Multilateral action, Reuters proposes, had some effect in forcing China to rationalize its steel industry. A similar approach may bear fruit for aluminum if multilateral action were a strategy the U.S. embraced, but it does not.