“Our second quarter results reflect strong performance from our global operations and a continued focus on productivity, cost management and capital discipline,” President and CEO Richard C. Adkerson said. “During the first half of 2018, we generated $2.7 billion in cash flow from operations and capital expenditures totaled $0.9 billion, enabling further strengthening of our balance sheet and advancement of initiatives to build value for FCX shareholders.

“We achieved important progress during the quarter to reach a new long-term partnership structure with the Indonesian government, and we remain focused on completing negotiation and documentation of definitive agreements to restore long-term stability for our Grasberg operations.”

The miner’s share price dipped Wednesday, Bloomberg reported, as a result of operational issues at its Grasberg mine in Indonesia. After hitting $16.43 in the early part of the day, the price dropped 6.4% to $15.06 around noon. It rallied the rest of the day, closing at $15.86 (down 1.37% for the day).

In addition, the miner reported paying off $454 million in debt in April.

As a major copper producer, Freeport-McMoRan is eyeing the copper market’s recent slide. 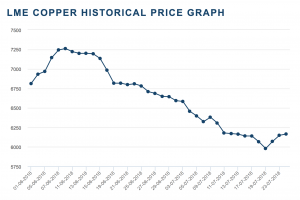 Adkerson referred to the slide in the copper price in tandem with the trade measures currently being undertaken by the U.S., in particular vis-a-vis China (the world’s top copper consumer).

As we sit here today, there is an anomaly between market sentiment and fundamentals in the marketplace,” Adkerson said. “We’re continuing to see real demand being very positive for our global business, including our business in China.”

Adkerson added that copper demand in the future will benefit from renewable-energy projects and electric vehicles.

“Absent having some sort of global recession or a major setback in China, market deficits in copper appear to be inevitable,” Adkerson added.

PREVIOUS POST:
U.S. Consultations Fizzle With India, Others Over Metals Tariffs
NEXT POST:
This Morning in Metals: U.S. Imports of Steel Fall 15.5% From May to June