Home | Global Trade | The Threat of a Trade War to the Global Economy
Commentary, Market Analysis

The Threat of a Trade War to the Global Economy

Many had hoped the announcement last month of 10% tariffs on China would be the signal for serious negotiations between the two trading partners, that China may come to the table and be willing to discuss some of the U.S.’s genuine concerns about theft of intellectual property and reciprocal access rights to each other’s markets.

While much was made about the trade imbalance, most realized there was no quick fix to the U.S. addiction to low-cost Chinese imports or the Chinese state-sponsored export model – both would take years to correct.

But a road map as to how that may be achieved would in itself be a major win from the confrontation. Indeed, a resetting of those issues to a more equitable position would be a legacy that would seal President Donald Trump’s place in history, without any advance on the myriad other battles he has started with friends and foes alike. 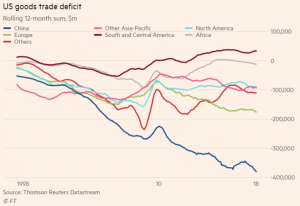 Alas, no such progress is being made.

According to a recent Financial Times article, if anything the opposite seems to be the case.

Negotiations have stalled at a low level, the report states, with discussions now limited to, at best, “conversations about whether we are going to be able to have a fruitful negotiation or not,” according to one senior administration official quoted by the news source.

China really had little alternative if it wanted to maintain face than to announce reciprocal tariffs to those originally applied by the U.S., but in so doing the tables were balanced in the view of U.S. negotiators. The president announced his intention to extend tariffs on $200 billion in annual imports from China, plus a possible increase from 10% to 25% on that $200 billion to give U.S. negotiators room to maneuver.

Unfortunately, the decision now seems to have stalled what little progress was being made. On Friday, China announced plans to impose tariffs on $60 billion of U.S. goods, according to a statement on the Ministry of Commerce website.

Beijing seems in no hurry to capitulate, despite the Shanghai stock market down 3.6% and Hong Kong’s Hang Seng index down 2.6% to the lowest level in 10 months. Opposition at home is muted to non-existent. Chinese media and much of the industry see themselves as the victims of an unprovoked attack and, as such, support Beijing in what is seen as resistance to an external threat.

In the U.S., however, opinions are more diverse.

Some among the president’s traditional hardcore supporters are still staunchly behind him, but criticism has been growing from other quarters, not least farmers who see themselves in the firing line as China switches buying from the U.S. to South America.

The president’s case may garner more national support if the case were articulated more comprehensively.

There is only so much national consensus that can be achieved via Twitter. The case for nurturing domestic industry has huge merit and, in reality, the cost to U.S. consumers could be relatively low. However, rather than debate and persuade, the barrage of tweets — mixed in with tweets about building a border wall and FBI investigations into Russian attempts to influence voting — creates a chaotic message board. As a result, trade – the most important issue of the day – is subsumed in a barrage of messages and policy priorities.

To give the “Art of the Deal” space to work on the international stage, the president needs, whether he realizes it or not, the ongoing support of voters, impacted communities (farmers, for example) and the manufacturing sector he purports to represent. As negotiations stall and the process drags on, this imperative will only intensify.