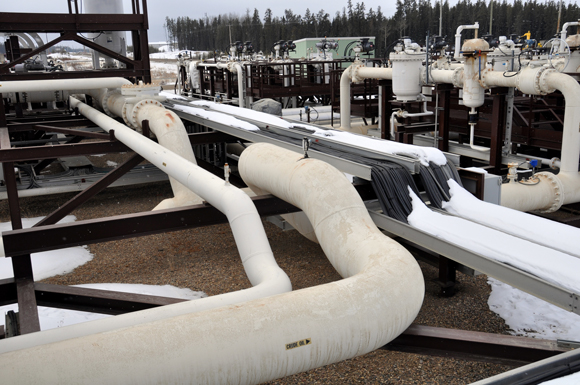 Just when environmentalists and shale oil had pretty much done for any more significant investment in tar sands, a couple of ex-oil industry veterans, David Sealock formerly of Chevron, and Jerry Bailey, formerly of ExxonMobil, are out to do to oil sands what modern drilling and fracturing did to tight oil.

Where are they doing it? Utah, of all places.

According to an article in The New York Times, a Ukrainian-backed Canadian minnow, Petroteq Energy, is promoting the environmental credentials of a new solvent-based extraction process to release the riches locked up in Utah’s Asphalt Ridge. As its name suggests, the deposit is surface occurring and, somewhat like the Alberta oil sands, is a heavy crude saturated rocky outcrop.

Petroteq claims its process uses “benign” solvents to extract the oil, which are then recycled, leaving virtually clean sand as only waste product.

The process is different from that employed in Canada and elsewhere, which relies on steam and large quantities of water, resulting in toxic tailings pools and horrendous scarring of the landscape.

Few would argue the Alberta tar sands have been an environmental disaster, but Petroteq is at pains to stress its technology is completely different and set to revolutionize the industry.

Specifically, the process takes large chunks of the oil-saturated sands and crushes them into small chunks, then mixes with solvents. The mix is then transferred to a second tank, where a centrifuge spins the lumpy liquid, separating the oil from the sands. Clean sand is moved to a reclamation landfill. Finally, the solvents are distilled out of the oily liquid and recycled over and over again. The company claims virtually no chemicals are left in the sand that is put back as landfill.

Petroteq itself is not going to rock the oil industry boat; it only employs 20 people at present. Although it is shortly ramping up from proving outputs of 250 barrels a day to 1,000 barrels a day, even peak output is only put at 10,000 barrels, some years down the line.

But the cost of production is said to be U.S. $32/barrel, including all costs and taxes. So, on current price predictions, the technology appears feasible. Much will depend on the firm’s ability to support its claimed environmental credentials.

Environmentalists call tar sands a carbon bomb, the article notes, and will lobby hard to prevent expansion if there is evidence that the plant is leaking solvents into the air, soil or water.

So much for peak oil.