Like a sudden and overwhelming springtime rainstorm, aluminum prices, as many are no doubt aware, received a shock in April.

On the news of U.S. sanctions targeting Russian companies and their owners — including Russian aluminum giant Rusal, the second-biggest aluminum producer in the world — prices spiked on fears of Rusal’s supply being pulled from the market.

However, the U.S. Treasury announced an extension, allowing businesses until Oct. 23 to unwind their business activities with Rusal (among others).

As a result, the price has come steadily down since then. 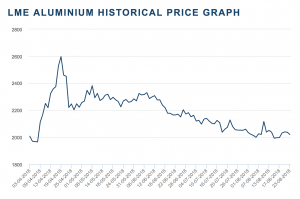 As we noted last week, Turkey has sought consultations with the U.S., via the WTO’s dispute settlement system, in response to the U.S.’s doubling of both the steel and aluminum tariffs against Turkey (bringing them to 50% and 20%, respectively).

Turkey has argued the escalation goes against provisions of the Agreement on Safeguards and the General Agreement on Tariffs and Trade (GATT) 1994.

Meanwhile, according to a Haaretz report, Israel has decided to drop its attempts to win an exemption from the U.S. aluminum tariff.

According to the report, countries that have so far won exemptions from the tariff were able to do so on the condition that they will limit their exports to the U.S., which goes against Israeli export policy.

Israeli aluminum exports are valued at $25 million annually, according to the report.

Companies on the Tariff Effect

Unsurprisingly, a number of U.S. companies have noted the effect of the tariff on their bottom lines.

According to USA Today, Coca-Cola cited the tariff as the basis for its decision to raise prices on its soft drinks.

“Clearly, it’s disruptive for us. It’s disruptive for our customers,” CEO James Quincey was quoted as saying during the company’s Q2 earnings call. “But I think the conversations have been about how is this going to work for each and every customer.”

Meanwhile, automakers have also cited the tariffs’ impact on their bottom line.

However, during its FY 2018 Q1 — the three-month period ending June 30 — earnings call in July, Nissan Corporate Vice President Joji Tagawa said the Section 232 tariffs had a limited impact during Q1; going forward, the impact will depend on how much the tariffs will continue, citing the uncertainty of the situation.

He added the company will be operating under the mindset of localization.

“Globally, we have been promoting localization,” said Tagawa, adding they would like to “pursue localization [and] increase local content.”

Bolstering the domestic steel and aluminum industries, particularly in light of rising imports, has been a stated goal of the Trump administration even since launching a Section 232 investigation on the matter back in April 2017.

In this vein, U.S. Steel’s twin announcements this year regarding the restarting of blast furnaces at its steelworks in Granite City, Illinois, was touted as a victory for the administration.

On the aluminum side, Century Aluminum’s recent announcement that it would invest $150 million to double its output was also seized upon by the administration as a victory, an affirmation of its tariff strategy.

“And while U.S. production has steadily declined since 2000, China’s output of aluminum has increased by 1,390 percent, from 2.4 million metric tons in 2000 to a whopping 36.2 million metric tons in 2017,” Ross said during an event celebrating the restarting of a smelter. “China’s output last year was 49 times higher than U.S. production, and almost all of it was sub-standard, and subsidized — produced by state-owned enterprises.

“For the first time in decades, we are changing the trajectory of the industry. Many have painted our efforts to create a level playing field and ensure the continued viability of the aluminum industry as the starting of a trade war. But you have been engaged in this fight for a long time.”

The company aims to return to 100% capacity by early next year and add 300 jobs in the process.