The Automotive Monthly Metals Index (MMI) dropped three points this month, falling for our reading of 96. 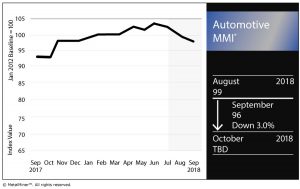 August proved to be an uneven month for auto sales in the U.S.

General Motors no longer publicly reports sales on a monthly basis, instead reporting quarterly. However, according to a Bloomberg report, GM’s August sales dropped 13% year over year.

Ford Sales Analyst Erich Merkle noted the company’s gains in SUVs were led by the Ford Expedition, which was up 94.6%, and the Explorer (up 19.2%).

Meanwhile, auto sales in China soared through the first six months of the year (up 5.6%), according to Forbes, but that has slowed since.

As has been referenced with respect to individual metals, rising trade tensions have had a generally depressive effect on multiple levels of the Chinese economy. The U.S. and China have already traded $50 billion in tariffs apiece, and the U.S. is currently reviewing additional potential tariffs on Chinese goods valued at $200 billion.

One ongoing point of dispute was regional auto content; that is, the percentage of an automobile that must be made using North American materials in order for that vehicle to be sold in the North American market without tariffs.

According to the agreement in principle, the threshold for regional auto content would increase from 62.5% to 75%.

Last week, Canada picked up negotiations with the U.S., which have spilled into this week.

In a phone conversation with Mexican President Enrique Pena Nieto, Trump zeroed in on Canada’s dairy industry and suggested the U.S. could impose tariffs on automobiles from Canada.

“You know, they have tariffs of almost 300 percent on some of our dairy products, and we can’t have that. We’re not going to stand for that,” Trump said.

“I think with Canada, frankly, the easiest thing we can do is to tariff their cars coming in. It’s a tremendous amount of money and it’s a very simple negotiation. It could end in one day and we take in a lot of money the following day.”

PREVIOUS POST:
This Morning in Metals: Russian Aluminum Giant Rusal to Get the Cold Shoulder?
NEXT POST:
Argentina’s Latest Financial Crisis: Have We Been Here Before?