The Construction Monthly Metals Index (MMI) picked up two points this month, rising 2.2% for a September reading of 92. 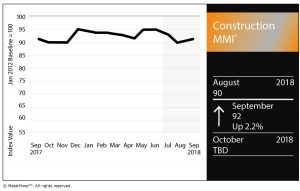 According to the Architecture Billings Index (ABI) — put out by the American Institute of Architects — architecture billings grew last month, but at a slower pace.

The ABI for August hit 50.7 (a reading of 50 marks no growth), meaning growth was relatively minimal.

“However, this is not yet cause for concern because indicators of new work in the pipeline—measured by inquiries into new work and the value of new signed design contracts at firms—both remained strong in July,” the ABI report for the month states.

This month’s survey asked architecture industry professionals regarding the impact of tariffs on their businesses on the heels of recent U.S. tariffs and the resulting retaliatory tariffs.

According to a Bureau of Labor Statistics (BLS) report released today, U.S. unemployment for August was unchanged from the previous month, holding at 3.9%.

A number of sectors added jobs in August, according to the report, including construction.