Home | Global Trade | When and Where is the Next Recession Coming From?
Commentary, Market Analysis

When and Where is the Next Recession Coming From?

At a recent forum for business leaders, I was surprised the topic of conversation was not Brexit or Donald Trump’s latest tweet, or even cricket, but when the next recession would hit.

That hasn’t been the case for many years now. Since 2009, we have experienced a more or less constant bull market, giving us the longest run of positive growth for a hundred years. Business leaders have been cautiously optimistic growth would continue for the foreseeable future; only recently has the tone changed.

Not that it has felt quite that joyous — markets have been volatile, particularly commodities, and in Europe government-imposed austerity aimed at balancing excess state spending needed to nurse sick economies back to growth has meant many have felt life has been tough up until the last few years.

But now many in government, industry, academia and even the media are asking the question: when will the next recession hit?

Typically, the media, as here in The Telegraph, are being somewhat more sensationalist about the issue. For example, “The next downturn could rival the Great Depression and wipe $10 trillion off US household assets,” the headline of The Telegraph article reads.

But even so, the article in question makes some sound observations.

Martin Feldstein, president of the U.S. National Bureau of Economic Research and a former chairman of the White House Council of Economic Advisors, was quoted as saying “We have no ability to turn the economy around, fiscal deficits are heading for $1 trillion dollars and the debt ratio is already twice as high as a decade ago, so there is little room for fiscal expansion.”

The worry is that after years of sluggish growth, ultra-low interest rates and the buildup of a massive Federal Reserve balance sheet of assets the world’s major economies lack the fiscal, monetary, and emergency tools to fight the next downturn. 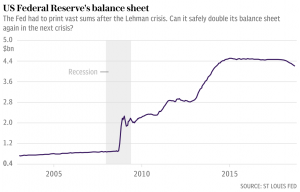 Nor is the U.S. the worst-placed. The economy is still experiencing good levels of growth, the Fed is gradually putting up interest rates (which will allow it to cut later if needed) and the country is blessed with a strong central bank.

But Europe has no fiscal backup, rates are still at record lows and the ECB has committed to holding its reference rate at minus 0.4% until the end of next year, the article states, by which time the end of the cycle could be almost upon us.

Another Telegraph report is suggesting there is a one-in-three chance of a U.S. recession within the next two years, citing the most probable catalyst as the Federal Reserve overtightening monetary policy.

Two economists from the CME Group are quoted as predicting the next recession was unlikely to be caused by mortgage debt or financial panic, as in 2008. Instead, Bluford Putnam and Erik Norland predict the recession will be triggered by U.S. interest rates being raised too high, which will cause trouble in emerging markets and overvalued technology stocks.

Certainly, technology stocks are a concern we all like to ignore when we look at our latest portfolio revaluation. The S&P 500, which is 25% tech stocks, is up 300% since March 2009, while the Nasdaq, which is majority tech stocks, is up 600% — those seem sustainable today based on current earnings, but are they long term?

The stock market, tech stocks included, remains remarkably solid and earnings remain robust such that, at least on current numbers, valuations are not ridiculous.

But economies outside of the U.S. are already showing signs of distress from the modest Fed tightening we have seen so far.

Some emerging-market currencies — like those of Turkey, South Africa and Argentina — already fragile, have taken a pounding this year, dramatically raising local currency costs for dollar-denominated debt.

The biggest gorilla in the room is China, facing a combination of long-term structural issues, such as a shaky shadow banking sector, non-performing debt and a slowing economy due to a trade war with the U.S. that is getting out of control.

The U.K.’s former prime minister Gordon Brown is quoted as saying the world is “in danger of sleepwalking into a future crisis,” adding the next crisis could well start in Asia because of the amount of lending through the shadow banking system.

Unfortunately, the climate of international cooperation is not the same as it was in 2008; today, the focus would be on apportioning blame instead of fixing problems. “Countries have retreated into nationalist silos and that has brought us protectionism and populism. Problems that are global as well as national and local are not being addressed,” Brown is quoted as warning.

For now there is not much buying organizations can or should be doing. Most expect the next crisis could be 12-24 months away, but the sheer number of parties that are talking about it could herald its arrival by sheer dint of expectation.