I say “blockbuster” not because it’s a rival to Tesla or a similar high-end brand — quite the opposite.

At under $9,000 (after massive subsidies available at the state and federal level in China), the Ora R1 could be a blockbuster in terms of sales.

With a projected range of 194 miles between charges and four doors, the article suggests the vehicle is firmly aimed at the less well-off commuter. In that context, it could have massive appeal for the authorities fighting smog and other forms of air pollution in China’s crowded cities.

The Ora R1 runs on just 47 horsepower with a top speed of about 62 mph, according to the report, which also quotes experts who say it should be capable of powering commuters for about a week per charge (based on real-world driving patterns).

Maybe it will be, but for us it has echoes of Tata’s Nano “people’s car,” designed to lure consumers off their cheap motorcycles and into their set of four wheels.

Poor quality, reliability and growing losses forced Tata out of the sector. It was not helped, it should be added, by a PR disaster when the Nano displayed a tendency to burst into flames, frequently recorded on social media. 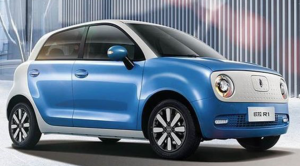 Whether the Ora R1 will fare any better than the Nano remains to be seen. At prices between U.S. $8,680 to U.S. $11,293, the price is heavily subsidized and should retail at twice that level.

Even so, a $20,000 price in unsubsidized markets would pitch the Ora well under current small car contenders, such as the Nissan Leaf.

But success or failure hinges even more on quality and reliability in this sector than it did for the Nano in India, where consumers’ expectations were not high. EVs outside of China have so far been relatively high-end products with classy interiors and many modern innovations.

A first road test for the R1 has yet to be released by the Western press. It has to be said, in the visual sense the car looks as bad as the old East German Trabant — but if it drives well, achieves its range projections and holds up from a reliability perspective, owners may yet ignore its ugly duckling looks and flock to what could prove to be a disrupter for the lower end of the EV market.

PREVIOUS POST:
Does Brexit Represent an Existential Risk to the European Union – or Even the Global Economy?
NEXT POST:
This Morning in Metals: Copper Prices Make Gains as Dollar Weakens