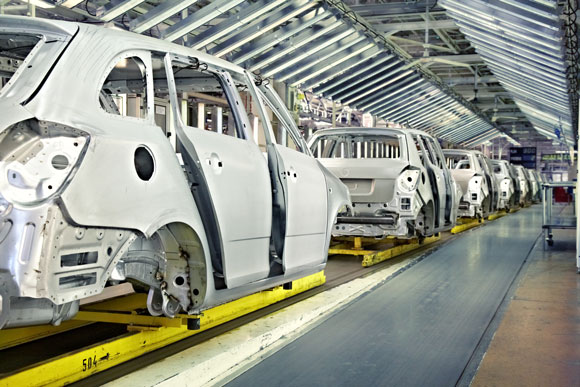 Britain has been in paroxysms of concern over the fate of its car industry.

Nissan, the largest of the Japanese car builders in the U.K., announced it would not be building its new X Trail model in the U.K., contrary to earlier promises made to secure millions in public support. Honda announced it was planning to cut 800 jobs at its Swindon plant this year.

Then, according to the Economist last week, Ford unveiled the European end of a global effort to cut costs by $14 billion a year, which may see 24,000 of its 200,000 workers laid off.

Such is the political fever in the U.K. at present, and the fault is being laid firmly at the door of Britain’s departure from the European Union (that is, Brexit).

In reality, while the uncertainty created by the U.K. government’s bungled exit negotiations have not helped, all these decisions reflect a wider downturn in the global automotive market.

Back to the Economist piece, citing automakers blaming falling sales and the need to merge operations or share platforms – such as Volkswagen and Ford’s recent tie-up for vans and pick-ups – to counter the threat from automotive electrification.

Yet many of the factors cited, while certainly constituting threats in the medium term – the move to car sharing or ride-hailing services could certainly decimate sales of personally owned cars in the medium term — are still in their infancy in terms of overall numbers and haven’t begun to impact total car demand yet.

Nor has the electric vehicle (EV), said by some to be the death knell of traditional manufacturers of internal combustion powered vehicles, as the likes of Google, Tesla and even rising Chinese EV manufacturers take over. 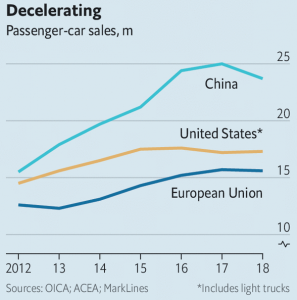 The drop in sales both in Europe, the U.S. and, most importantly, China is real enough — but the reason is much simpler than a change in consumers’ buying preferences.

GDP is slowing, most markedly where the fastest decline in sales has been: China. Consumers are worried by trade wars, slowing growth, fears over the stock market and even talk of recessions.

Rising sales come on the back of confidence and rising living standards; when consumers fear for their economic future, they stop or postpone buying.

That is what is happening in China and we are seeing beginning to happen in Europe, South America and probably later this year in the U.S.

According to The Economist, China, the world’s largest car market, shrank for the first time in over 20 years in 2018. Sales fell by 2.8% to 28.1 million vehicles and slid by 13% in December alone, giving a taste of what may be in store this year.

The U.S. market could be due for a severe shakeup if President Donald Trump’s threat to slap import tariffs on foreign cars comes into effect.

UBS Bank reckons that the worst case — tariffs of 25% — would see the American market shrink by 12% next year.

Further out, there are certainly challenges.

The consulting firm Bain & Company, is quoted by the paper as saying that America’s driving-age population is not growing (a trend mirrored in the rest of the world, the paper says). The firm reckons that the American market, currently at 17 million cars a year, could shrink to 10 million by 2025.

But for now, automakers are struggling to cope with a market that was growing strongly but has now taken a turn for the worse. China was for many Western brands their most profitable market. Not only have overall passenger car sales fallen, but Western automakers have been most heavily hit as the Chinese have reacted to the trade standoff by shunning foreign makes.

Car sales are not going to rise until confidence and growth picks up — when that may be remains to be seen, but for this year more of the same seems the most likely.