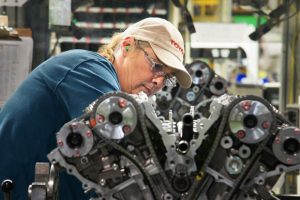 Automaker Toyota last week announced a push to increase its previous investment pledge in the U.S.

Last week the automaker announced it would up a 2017 pledge to invest $10 billion in the U.S. over five years, increasing the investment up to $13 billion.

“These latest investments represent even more examples of our long-term commitment to build where we sell,” said Jim Lentz, chief executive officer for Toyota Motor North America, in a company release. “By boosting our U.S. manufacturing footprint, we can better serve our customers and dealers and position our manufacturing plants for future success with more domestic capacity.”

Toyota is also investing in its Bodine Aluminum plant in Missouri toward the goal of producing an additional “864,000 cylinder heads for Toyota’s New Global Architecture (TNGA),” up from the current level of more than 3 million cylinder heads per year. The automaker is also investing in its Tennessee aluminum plant, namely for equipment and a building expansion to double its annual capacity of hybrid transaxle cases and housings to 240,000.

Toyota also plans to double its capacity of hybrid transaxles to 240,000 by 2021 at its West Virginia plant.

Earlier this month the automaker reported its February U.S. sales were down 5.2% year over year. For the first two months of the year, Toyota’s U.S. sales are down 5.9% compared with the same time period in 2018.

PREVIOUS POST:
Value of Raw Mineral Materials Produced by U.S. Mines Increases 3% in 2018
NEXT POST:
This Morning in Metals: Copper Prices Steady to Start the Week