Looking Ahead, Part 2: With Steel, What Happens in China Doesn’t Stay in China

[Editor’s Note: This is the second of a two-part series on steel supply and prices. Revisit Part 1 here.]

Looking at longer-term trends in Chinese steel prices, we can see after hitting a low during mid-to-late 2015, prices trended upward overall (with some ups and downs along the way). For example, prices dipped in summer 2016, in spring 2017 and somewhat less so in spring 2018. 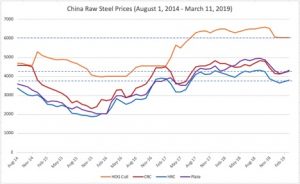 HRC and CRC prices trended very similarly, with the price gap narrowing over time. In fact, Chinese CRC prices stood higher in August 2014 than today’s prices. However, prices for CRC have remained above 4,000 RMB since August 2017.

HRC prices increased slightly, while plate prices started out lower but trended higher than CRC. Over time, the price differential for HDG increased; however, the price trends reliably with HRC and CRC, especially since August 2017.

Chinese HRC prices turned around in February and have gained momentum in March.

Prices moved similarly for both U.S. and Chinese HRC late in February and into March.

Meanwhile, the price gap between Chinese and U.S. prices narrowed into the early months of 2019: 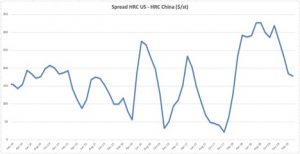 Source: Analysis of MetalMiner data from MetalMiner IndX(™), including price data through March 12

China CRC prices have also increased in the early months of 2019. 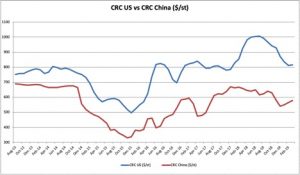 The price gap between Chinese and U.S. prices narrowed, but still remains wider than prior to imposition of the U.S.’s Section 232 tariffs of March 2018. 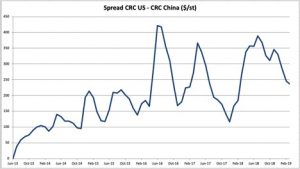 What can we expect from the Chinese government in terms of production reductions?

Why do high-level goals, such as reduced production, fail?

“The profit gained from selling one ton of steel is less than the profit from selling one dish of fried pork,” Shen Wenrong, chairman of the largest private steel company in China, was quoted as saying in a 2015 Bloomberg article. This points to a lack of actual willingness of Chinese domestic producers to throttle production.

China’s stated policy of production reduction has not happened on a net basis, even after environmental protocols paused production at times. At any rate, production and export figures continue to rise out of China, even as the domestic economy apparently weakens.

Given that global production capacity for steels continues to increase, we can expect this to have a depressing effect on steel prices overall.

On the other hand, if Chinese production moves upstream, it is realistic to expect price increases that stick as production becomes more advanced.

Even with China’s continued increase in production, U.S. imports of steel from all global markets decreased by 11.5% in 2018 over the year prior, according to the American Iron and Steel Institute. Revenue also improved overall for U.S. steelmakers, according to government data.

However, what happens in China price-wise, will not stay in China.

Pricing impacts in China continue to affect global prices given the country’s consistent global share of production numbers at around the 50% over the past few years.

As the Chinese government pushes the steel industry toward more advanced production, we can expect no less from domestic industry players in the U.S. As newer production facilities come online, we can expect to see closures of older production facilities. On a net basis, that is a good thing. If the U.S. industry continues to revitalize itself toward building long-term sustainable competitive advantages, it could avoid the so-called “Steelmageddon.”