Home | Automotive | Despite Poor Forward Indicators, Copper is on a Roll
Market Analysis

Despite Poor Forward Indicators, Copper is on a Roll

There seems to be no holding copper.

The metal’s price hit an eight-month high this month, helped over the line by the Federal Reserve dropping plans for further interest rate hikes this year.

But much of the rise seems to be on the back of positive investor sentiment over falling LME inventory and the expectation the rise of electric car demand will strain copper supply.

Apart from a large delivery earlier this month, copper has been on a steady decline, as the below graph from Kitco illustrates. 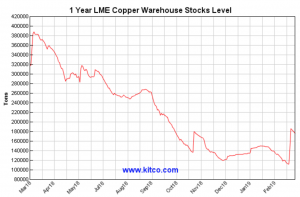 Inventory on the CME and SHFE has similarly run down, not surprisingly as the market has been in deficit to the tune of 265,000 tons per annum in 2017 and 387,000 tons last year according to the International Copper Study Group as cited by Reuters.

The World Bureau of Metal Statistics disagrees, however, saying the copper market recorded a surplus of 496,000 tons in January-December 2018, which followed a surplus of 138,000 tons for the whole of 2017.

It just goes to show, statistics are not always the precise game statisticians would have us believe.

Copper’s strength is somewhat harder to fathom when set against the backdrop of generally poor forward indicators.

PMI numbers in the world’s largest consumer, China, fell below 50 into contraction territory in December and stayed there in January, according to Reuters, with those of Germany not looking much better. Both picked up a little in February, but were hardly bullish.

Citibank, though, remains in the bull camp, according to Reuters, espousing the tight market and rising demand for electric vehicles and the infrastructure to support them (notably in China).

The argument goes the introduction of far stricter carbon dioxide emissions limits that will kick in next year in Europe — coming on the heels of consumers turning away from diesel after Volkswagen’s pollution-cheating Dieselgate scandal, which has hit demand for diesel-powered vehicles — means manufacturers have no alternative other than to move into electric cars en masse.

According to Ferdinand Dudenhoffer, head of the Center Automotive Research in Germany, until recently carmakers turned primarily to diesel to bring down their emissions averages, but “there is no going back to diesel, so they have no other choice but to speed into the electrical era.”

Investor sentiment does not have to be accurate to move markets — you just need enough people believing the market is heading in a certain direction to make it move.

Whether copper investors are right about the demand from electric vehicles remains to be seen, as there have been false dawns before.

In the short term, we are more inclined to look to PMI and GDP numbers to gauge likely demand.