The mandate for the Global Forum on Steel Excess Capacity (GFSEC), an organization that has come in for criticism from the U.S., expires in November.

However, the European Steel Association (EUROFER) argues the forum, which has focused on creating policies to tackle global excess capacity, should have its mandate extended.

EUROFER released a statement ahead of a meeting of the GFSEC March 28-29, calling for the extension of its mandate (scheduled to expire in November).

“We call on members of the Global Forum to agree on a continuation of the forum’s mandate beyond November 2019,” EUROFER Director General Axel Eggert said in a prepared statement. “Continued international work on excess capacity and related government support measures would contribute to the sustainability of our global industry.”

Steel excess capacity — which drives down prices and consequently floods markets with cheap product — has been a consistent talking point among steel circles in Europe and the U.S. As most are aware, the U.S. last year imposed tariffs on imported steel. 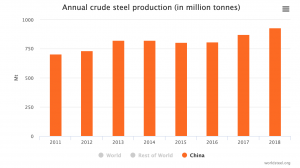 The GFSEC was formed in September 2016 by G20 leaders at a Hangzhou summit.

“GFSEC’s work has already produced results, such as detailed statistics on steel capacity and production around the world and has instigated work to cut excess capacity where it is needed most,” Eggert added in his statement.

In late 2017, the 33 members of the GFSEC met and agreed to a set of six guiding principles for the creation of specific policies to combat overcapacity (the full report from the meeting is available here).

According to a release from the Organization for Economic Cooperation and Development (OECD), the principles “emphasize the importance of having the right policy framework conditions; they call for the removal of subsidies and other measures that distort steel markets; they stress the need for a level playing field among steel enterprises of all types of ownership; they highlight the importance of the Forum regularly updating its information on capacity and policy measures.”

Nonetheless, EUROFER said the agreement and steps taken since then mark only the “beginning of the process.”

“Global steel overcapacity is still at least 550 million tonnes, according to the OECD,” Eggert said. “We are still very much at the beginning of the process, and there is clearly a need for the GFSEC’s mandate to be extended.”

Furthermore, Eggert argued not extending the mandate would be dangerous.

“In a world where global overcapacity is still very much present – and with proliferating trade distortions – there is a greater need than ever for the GFSEC,” Eggert said. “Not renewing the mandate of the Global Forum would mean abandoning the global steel industry when it is still at a perilous juncture. Effective multilateral cooperation is needed in order to preserve fair and free trade in this essential sector.”

The GFSEC came in for criticism from the U.S. last year following a meeting of members September 20, 2018, in Paris.

“Unfortunately, what we have seen to date leaves us questioning whether the Forum is capable of delivering on these objectives,” the Office of the United States Trade Representative said in a prepared statement following the meeting. “We do not see an equal commitment to the process from all Forum members. Commitments to provide timely information critical to the proper functioning of the Forum’s work, for example, have gone unfulfilled. More importantly, we have yet to see any concrete progress toward true market-based reform in the economies that have contributed most to the crisis of excess capacity in the steel sector.”