Declining Automotive Sector Could Have Ripple Effect on U.K. Economy

When you think of the United Kingdom, you don’t normally think “automotive powerhouse.”

Sure, the U.K. has a long and illustrious tradition of making some of the world’s most iconic motorcars.

Think Rolls-Royce, Bentley, Jaguar, Lotus, Morgan and, my own favorite, Aston Martin. The U.K.  is also home to most of the world’s Formula One racing teams research, development and production facilities.

Yet, at a less glamorous but arguably more important level, the U.K. automotive industry is not only key to the country’s manufacturing base, it also operates as one of the most sophisticated and integrated supply chains in Europe.

As the graphic below from industry site SMMT illustrates, over 80% of U.K.-made cars are exported — over 50% of them into Europe, but the rest worldwide.

On the supply side, more than half of the parts used in making those vehicles come in from overseas, linking Europe into one large, integrated manufacturing supply chain. 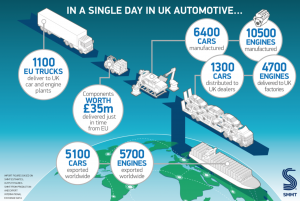 Vehicle manufacturing is the U.K.’s second-largest manufactured product export, making up 11.4% of the total. By comparison, the U.S. has automotive exports ranked down at fifth at only 8.4% of exports.

So, when automotive production declines in the U.K., even for one or two months, it has a significant knock-on effect to the rest of the economy.

Arguably, the U.K. has not faced such a challenging period since its darkest days in the 1970s. According to the Financial Times, car production in May dropped by 15%, its 12th straight month of decline. Production for the domestic market was 25% lower than the same period last year, while export output dropped over 12%. All of this comes with the backdrop of a fundamentally cheaper exchange rate following the 2016 referendum to leave the E.U., which should have made U.K. exports significantly more competitive. 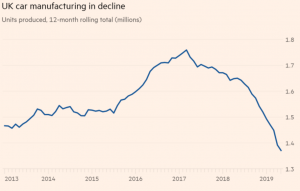 Part of the reason for the decline, after years of bad press, has been buyers’ sudden change of heart regarding diesel engines.

Some manufacturers, like Jaguar Land Rover, were producing over 90% of their fleet with diesel engines and have been frantically trying to adjust to the market’s growing aversion to oil burners. But equally, it has to be said, carmakers are taking the opportunity to switch investments in new models from the U.K. to the E.U. mainland (in case the U.K. fails to secure a true free trade agreement with the E.U.).

Any form of partial free trade agreement that involves border checks and/or tariffs will have a detrimental impact on the ability of automotive companies to run an integrated, just-in-time supply chain with their European parts suppliers.

Automotive companies see this as a significant risk and, when faced with choices, have opted to favor investment in their European plants, even though the U.K. operations have traditionally performed more efficiently.

In the unlikely event the U.K. concludes a true free trade agreement — by which I mean one, like now, that does not require border checks — it is possible some of this decline will be reversed.

However, it will take years before carmakers will have enough trust in the political relationship between the U.K. and E.U. to feel comfortable investing hundreds of millions in new models to be made in the U.K.

In the meantime, automotive is unlikely to get back to its recent 2017 peak.