Is the Global Automotive Manufacturing Downturn Cyclical or the New Normal?

Automotive markets just about everywhere are in decline this year.

The question is: to what extent is this a cyclical downturn as opposed to a structural shift?

The Financial Times article reported Indian passenger vehicle sales fell 31% last month from the same time a year earlier, according to the Society of Indian Automobile Manufacturers. It was the worst month since the turn of the century in a dismal spell that has seen sales fall 20% or more for four consecutive months, while sales have failed to rise for more than a year.

India’s economy is slowing, with GDP growth falling to a five-year low of 5.8% in the first quarter of 2019. In addition, a liquidity squeeze caused by a crisis in its shadow banking sector is choking off consumer demand and business expansion.

The article goes on to explain that about 40% of new car loans came from these shadow banks, making liquidity tight. Although a reduction in India’s high car taxes — the government levies a 28% goods and services tax on cars, with the effective rate including other duties rising as high as 48% for some vehicles — is a possibility, it is unlikely the new administration’s cash-strapped budget could afford it.

Significant as India’s car market is — as recently as last year, India’s motor market was thought to be on course to overtake Germany and Japan and become the world’s third-largest, the Financial Times reported – Germany’s is even larger.

Yet, declines are dramatic in Germany, too. 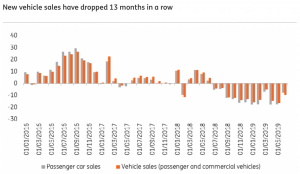 Domestic production has been hit by the delayed introduction of the new worldwide light vehicle test procedure, which caused severe disruption to German automotive production and shipments.

But matching the introduction of the China 6 emission standard has also caused a downturn in Germany’s largest automotive export market: China.

To underline the importance of the market, ING Bank reported that in 2018 almost one-quarter of all cars sold in China were German. BMW and Daimler recorded more than one-third of their total car sales in China. For Volkswagen, the share is even bigger (40%).

Yet new car sales in China have fallen for 13 months in a row, a slump that started in the second half of 2018 when the trade war between China and the U.S. began to heat up, according to ING.

Given that some German car manufacturers actually export U.S.-produced cars to China, there has been a clear and direct impact of the trade conflict on the German car industry.

But that is only part of the story.

The switch to China 6 meant consumers held off buying the older models despite a major distributor push to discount old stock.

But the industry worries China could be going through a structural shift.

According to ING, China is already the largest ride-hailing market in the world, with over 459 million customers and a turnover of around U.S. $53 billion. By comparison, where it all started in the U.S. there are currently 66 million users generating U.S. $49 billion in turnover.

To put things into perspective, one-third of the Chinese population already uses alternative mobility solutions, while in the U.S. the figure is around 20% and in the E.U. it is just 18%. Further, while in the U.S. ride-hailing is used occasionally by a car owner, in China many users are not yet on the car ownership ladder; as ride-hailing becomes more widespread, those users may elect never to become car owners.

According to Just–Auto, new vehicle sales in China fell by 4.3% to 1.81 million units in July from 1.89 million units a year earlier, according to wholesale data released by the China Association of Automobile Manufacturers. This includes all vehicle types, passenger vehicles and commercial vehicles, with the cumulative seven-month total at 14.13 million units – down by 11.4% from the 15.96 million units sold in the same period of last year.

Jeff Schuster, president of global forecasting at LMC Automotive, is quoted in Europe’s Autonews as saying global light-vehicle sales will decline 2.6% in 2019 to 92.2 million units. Through 2025, he doesn’t see more than 2% growth as the mature markets of western Europe, the U.S., Japan and Korea contract in volume over the next five to seven years. Only electric vehicle production as a subset — coming from a very low base — is set to rise.

The industry’s current downturn is in part cyclical and production will recover regionally as consumer confidence and access to credit improves.

At the same time, there is a structural shift happening that will impact the industry’s long-term future and create significant challenges for global western carmakers in the years ahead.