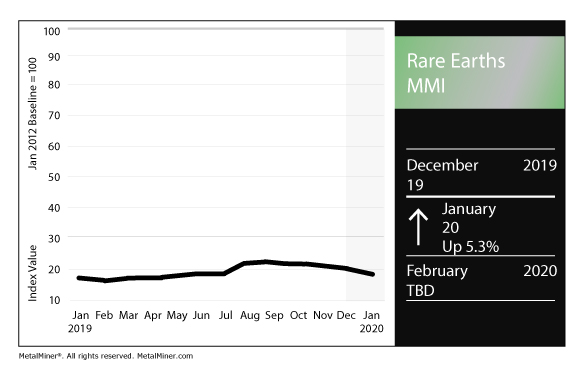 “The regulator has provided Lynas with a list of additional reports and management plans that the regulator now requires in order to reconsider the application,” Lynas said. “The processing limit resets on 1 January each year, and Lynas intends to reapply for an increase for CY20.

In other news, last month Lynas announced it would build a new cracking and leaching plant in Kalgoorlie, Australia.

Given China’s overwhelming dominance of the global rare earths mining and processing market and in light of the U.S.’s ongoing trade war with China, the U.S. has been looking for alternative avenues for the acquisition of rare earths.

The aforementioned is especially true, as last May China threatened to restrict exports of rare earths, which are critical for a wide range of high-tech applications, from consumer electronics to military uses.

The latter usage is of course of interest to the U.S. Army, which has plans to fund the construction of new rare earths processing facilities, according to a Reuters report last month.

Circling back to Lynas, the Australian firm released a brief statement indicating interest in the potential U.S. project.

“The tender period has not yet closed,” Lynas Corp. said in a prepared statement Dec. 13. “Lynas would expect to submit a compliant tender.”

Of note, Lynas signed a memorandum of understanding with Texas-based Blue Line Corp. last year to form a joint venture aimed at building a rare earths separation facility in the U.S.

“Rare Earths separation capacity has been absent from the United States for several years, and the Lynas /Blue Line joint venture aims to fill a key gap in the United States supply chain,” Lynas said in a statement May 20, 2019. “Rare Earths are essential inputs to high technology, high growth industries in the digital age. The Lynas/Blue Line joint venture (JV) will help ensure that U.S. companies have continued access to Rare Earth products by providing a U.S. based source. The JV would be the only large-scale producer of separated medium and heavy Rare Earth products in the world, outside of China.”

As reported by Reuters, the Chinese city of Ganzhou has launched a new rare earths exchange on which spot transaction can be made for rare earths and other minor metals.

According to the report, the exchange, which launched Dec. 31, 2019, is the second rare earths exchange in China (preceded by the Baotou Rare Earths Products Exchange in Inner Mongolia).