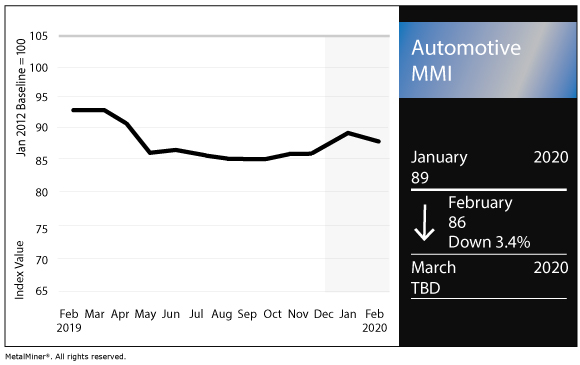 General Motors is scheduled to announce its Q4 and full-year 2019 sales results today at 8 a.m. ET.

Nissan announced Feb. 3 it will also move to a quarterly reporting schedule and will release its first quarterly sales results in early April. Last month, Nissan reported 2019 sales of 1.35 million vehicles, down 9.9% from the previous year.

Meanwhile, for the automakers still reporting on a monthly basis, Honda reported January sales of 101,625 vehicles, down 4.3% on a year-over-year basis.  Car sales were down 10.6%, while truck sales ticked up 1%.

According to a forecast released jointly by J.D. Power and LMC Automotive, January retail sales in the U.S. are projected to drop 0.4% on a year-over-year basis.

“In a retail market that is expected to decline for the fifth consecutive year, it’s important to remember that January is typically the lowest sales month of the year,” said Thomas King, president of J.D. Power’s data and analytics division.

According to the forecast, January sales account for just 6.3% of annual sales.

“General Motors and its joint ventures delivered more than 3.09 million vehicles in China in 2019, amid a challenging environment with weakened consumer demand,” the automaker said. “The company continued the transformation of its portfolio, including luxury vehicles, large SUVs, and the ongoing development and rollout of its new energy vehicle (NEV) lineup.”

“2019 was a challenging year for the Chinese automotive market and for Ford in China,” said Anning Chen, president and CEO of Ford Greater China. “While our sales declined primarily in the value segment, the decline continued to narrow in the second half and saw the stabilization of our shares in the high-to-premium segments. The pressure from the external environment and downward trend of the industry volume will continue in 2020, and we will put more efforts into strengthening our product lineup with more customer-centric products and customer experiences to mitigate the external pressure and improve dealers’ profitability.”

GM announces $2.2B investment in Detroit-Hamtramck for EVs

In another marker of building momentum for the electric vehicle revolution, GM recently announced plans to invest $2.2 billion in its Detroit-Hamtramck assembly to make it the automaker’s first plant devoted exclusively to the production of electric vehicles.

The plant, which currently produces the Cadillac CT6 and the Chevrolet Impala, will shift toward production of electric trucks and SUVs.

Originally opening in 1985, Detroit-Hamtramck will be temporarily idled at the end of this month in order to allow for renovations, GM said.

PREVIOUS POST:
Do falling commodity prices mean we are in bear territory?
NEXT POST:
This Morning in Metals: U.S. goods and services deficit hits $48.9B in December