The Financial Times reported business activity at Guangzhou’s port, one of the biggest in China for commodities trading, has plunged, with fewer than a third of workers on duty.

One impact is that base metal traders are calling force majeure, the clause in contracts that allows buyers to delay or cancel orders on the grounds that a natural or unavoidable catastrophe has interrupted the expected course of events and prevented the buyer from executing their responsibilities under the contract.

Copper buyers are reported to be using the clause to delay shipment of copper imports from Chile and Somalia. So far, the delays are mostly coming in at two weeks; depending on how the epidemic develops, wholesale cancellations could follow.

The risk of cancellations increases as the price falls — it shouldn’t, but the temptation to cancel and then rebuy in some days or weeks at a significantly lower price may be too hard to resist.

Apparently, traders have been invoking the force majeure clauses since the end of January, but not just for copper.

According to the Financial Times, traders have applied the clause to liquified natural gas (LNG) shipments, too, as energy demand fails to recover after the Lunar New Year holiday in the face of widespread factory go-slows.

Copper was already one of the worst-performing metals in Q1 so far, as this graph from Capital Economics illustrates: 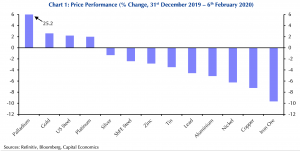 Although the copper price has rebounded a little last week following steep falls in January, Capital Economics says it is too early to call the bottom. If the 2002-03 SARS outbreak is any guide the research house suggests China’s copper consumption could decline by roughly 500,000 metric tons as a result of the coronavirus, which would be much larger than the deficit of around 100,000 tons we had expected in the copper market for this year.

Local smelters are said to be continuing to operate but at reduced capacity, with raw material and delivery impediments due to travel restrictions. In previous epidemics, like SARS, copper consumption took a hit and then rebounded; most expect that pattern will in some form repeat itself here.

But for now, suppliers are taking the pain of delayed and, in time, no doubt canceled contracts, while everyone waits to see how and when the spread of the epidemic will be bought under control.