The price spiked dramatically on Indonesia’s announcement that it would bring forward its planned ban on the export of nickel ore.

As a result, many consumers and not a few traders caught on the wrong side of deals lost out heavily.

The major winner seems to have been China’s Tsingshan. The stainless steel producer, is reported in the article to have stockpiled nickel before Indonesia’s export ban was announced, making massive paper profits as the price rose.

Citigroup is quoted from October likening the nickel supply squeeze being a “Hamanaka moment,” referencing the Sumitomo copper trader Yasuo Hamanaka who at one point held 5% of world supplies, The Telegraph reported. 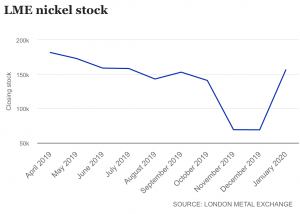 It is the timing as much as anything that is raising questions.

Stocks of nickel tumbled and prices surged just before Indonesia’s announcement as buyers fought to secure supplies. The suggestion — no specific allegations have been brought yet — is one of collusion between Tsingshan and the Indonesian authorities.

Jim Lennon, a commodities expert at Macquarie, is quoted as saying that although he has “never seen such a huge inventory move” in his four decades in the metals industry, he does not believe a great mystery needs to be solved.

“I’m sure there was strong lobbying from Chinese investors in Indonesia to bring forward the ban, but they didn’t meet in a secret room and not tell anyone,” Lennon was quoted as saying.

Tsingshan is a major investor in Indonesia, with steel mills and its own nickel ore sources, but it has insufficient capacity to meets its steel production demands. Last year, when prices dipped in the summer, it piled into the market and bought up to an estimated 150,000 tons.

This has created two avenues of concern, the first being to what extent did Tsingshan know the export ban was being bought forward — that is, was this a case of insider dealing?

And the second is a wider concern that, via China’s Belt and Road initiative, the country is tying up essential raw material supplies and creating a stranglehold in certain key materials.

The American Iron and Steel Institute (AISI) is said to have called on Washington to investigate, saying China’s actions seriously disadvantage U.S. producers. The Chinese mill is said to have access to nickel at prices way below the global price by virtue of its Indonesian mines, but unlike other vertically integrated operations, it is supported by the Chinese state in cooperation (if not collusion) with the Indonesian government.

Tsingshan’s steel plants in Indonesia were “heavily promoted and sponsored by the Indonesian government” and financed by China’s Belt and Road program, the AISI is reported by The Telegraph as saying.

The European Steel Association (EUROFER) is urging the LME and the Financial Conduct Authority to launch a formal investigation. So far, the LME is gathering data and quietly investigating the matter.

It would not be the first time large players — consumers, producers or traders — have sought to manipulate prices; the LME is well-versed in understanding the ways and means.

But some months have passed without any formal action and producers, in particular, fear the lessons may be lost if action is not seen to be taken soon.