by Fouad Egbaria and Stuart Burns on April 9, 2020 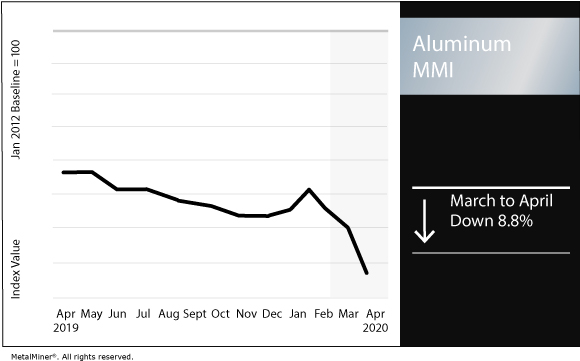 Smelters continue to churn out product despite lagging demand

We wrote about the resultant surge in inventories back in March and said it presented an existential threat to the aluminum market outside China because excess metal was likely to be exported as semi-finished products.

Primary mills, however, have continued to produce ingot; following weeks of declines, inventory on the LME has started to rise again (up some 17% since mid-March to month’s end).

As Reuters so graphically illustrated last month, we have been here before:

The report states Shanghai Futures Exchange stocks have mushroomed from 185,127 metric tons at the end of December to 519,542 tons by mid-March, but warns that may be the tip of the iceberg, as there are substantial stocks blocked at mills and held off warrant.

What happened in China in the first quarter is happening in Europe and North America now. The surge in inventory we saw after the 2008-2009 financial crisis is likely following something similar, if smaller so far, now.

How large inventory build becomes depends on whether smelters respond to the downturn by idling capacity and how long the lockdown cuts into demand.

For consumers, the prospect of lower aluminum prices for longer is obviously attractive. At this stage, it is impossible to predict how it will play out, but one dynamic that is in favor of continued stock build is the forward aluminum spread, which is currently supportive in the same way it was in 2008-2013, to parking excess production in the stock and finance trade.

Cash to three months is currently showing a premium of 2.5% and a more likely finance period of cash to end December is showing 11.5% — more than enough in this ultra-low interest rate environment to finance, store, insure and make a profit.

High inventories will weigh on prices as they have since 2014 and cap gains, even if supply came back into balance next year.

Ever have that sense of deja vu?

According to data released by the International Aluminum Institute, global aluminum production in February totaled 5.11 million tons, down from 5.45 million tons in January.

The February total marked an increase from the February 2019 total of 4.97 million tons.

Century Aluminum announced it had reached a one-year extension of the labor contract with United Steel Workers Local 9423 (the union that represents hourly employees at the company’s smelter in Hawesville, Kentucky).

The contract was set to expire April 1. Union members ratified the contract March 23.

The Hawesville smelter is the largest of Century Aluminum’s three U.S. facilities and has an annual capacity of 250,000 metric tons.

The Hawesville smelter supplies the electrical conductor, remelt ingot and high-purity ingot markets, and the defense and aerospace industries, according to the company’s website.