Two articles in Reuters this week support observations we have made in posts this month and paint an encouraging picture for aluminum consumers, if not for producers, facing the first half of this decade.

The first post — by one of our favorite Reuters columnists, Andy Home — sounds a warning to aluminum primary producers not to repeat the mistakes made after the financial crisis (or Great Financial Crisis as he dubs it), when producers were glacially slow to react to the collapse of demand and continued to churn out metal despite there being limited manufacturing demand.

Excess production was readily taken up by financial institutions involved in the stock and finance trade, warehousing millions of tons of metal that then overshadowed the physical market for years to come and depressed the potential for aluminum prices to rise. The post likens the position in aluminum to that in oil but observes that, unlike oil, aluminum is easy to store. Whereas oil briefly went negative for the front May month (essentially, spot) delivery, aluminum only needs a decent contango (that is, when forward futures prices higher than spot on exchanges like the LME) in order to park millions of tons of metal again.

The post describes the process as follows: “As long as the forward price is trading at a sufficient premium to the cash price to cover the cost of money, storage, and insurance, stocks financiers can make a tidy profit from letting the metal sit in deep-freeze in a warehouse.”

After the financial crisis, LME stocks surged from 1.17 million to 4.6 million metric tons between August 2008 and August 2009 and continued to rise well into 2014, when the narrowing spread finally undermined the model (as the below graph courtesy of Reuters so readily illustrates).

While some minor smelters closures have taken place — one potline out of four here, another there — global output has increased as major and minor additions have come onstream or back onstream.

Global aluminum production rose 2.1% over the first three months of this year, Reuters reports, despite demand collapsing. An 11% year-on-year jump in first-quarter production in the Gulf, the post states, reflects the ramp-up of a new 540,000 metric ton per year line at Aluminium Bahrain. Higher output in Latin America resulted from a return to full capacity of Norsk Hydro’s Albras plant in Brazil after a government-mandated part closure of the alumina refinery which feeds the smelter and in North America, a 4.1% rise in output is largely due to the return of the Bécancour smelter in Canada after a crippling 18-month strike ended in July last year.

The bulk, though, is from China, where smelters managed to lift output by 2.2% over the first three months of this year despite quarantine measures and a collapse in first-use demand from product manufacturers.

In percentage terms, that does not appear to be significant, but 2.2% on a production capacity of more than half the world’s aluminum equates to hundreds of thousands of tons. 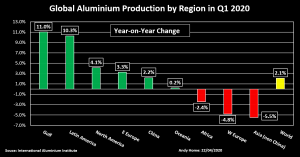 Despite a falling oil price — usually seen as undermining support for aluminum prices — LME prices and particularly SHFE prices have been a shade higher in recent days as investors have eyed falling SHFE inventory levels as a sign that demand is beginning to eat into excess supply.

But a second Reuters article suggests the trend may be short-lived, explaining China’s appetite for primary aluminum has more to do with short-term logistic challenges facing the aluminum scrap market – both domestic and imports – resulting in an increase in primary metal demand of 150,000 to 200,000 metric tons over the last 30 days. As those restrictions ease, scrap supply improves and scrap prices fall back; as a result, consumers will turn back to a greater reliance on scrap and primary inventory may build again.

If smelters do not bite the bullet and make cutbacks, however hard that is when many are partially insulated by hedged sales positions and have penalties under long-term power contracts if they are not honored, aluminum prices will remain lower for much longer.

That’s good news for consumers but terrible news for producers.